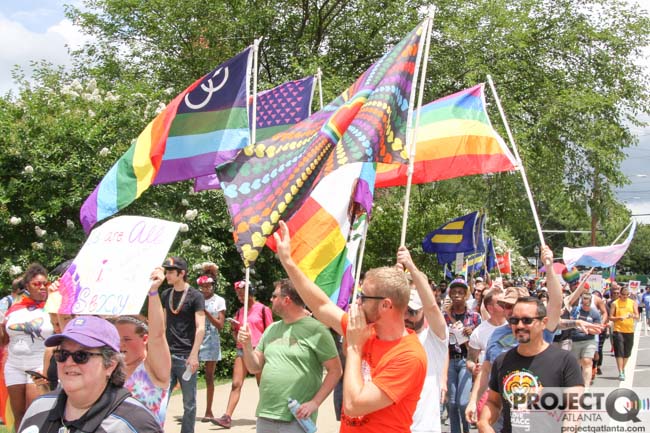 A diverse crowd of hundreds – if not more than a thousand – LGBTQ Atlantans rallied and marched in Midtown on Sunday, calling for equality while also commemorating the 49 people killed in the Pulse massacre.

The Atlanta Equality March was held in solidarity with the Equality March for Unity & Pride in Washington, D.C. It came one day before the first anniversary of the gay nightclub attack at Pulse in Orlando on June 12, 2016.

The Atlanta event attracted a capacity crowd inside the event space of Park Tavern at Piedmont Park for a rally. The march then overflowed the sidewalk onto 10th Street as it snaked along to Juniper Street and eventually back into the park.

“This is very overwhelming. It is amazing what we can do as a community,” said Jennifer Maguire, who hosted the event with wife Jami. The pair owns My Sister's Room.

The pair realized on Monday that there wasn't an event being organized in Atlanta to coincide with the Washington, D.C. march. So they took action – a theme repeated by several speakers at the rally.

“I was an individual who took action, there is nothing special about me. There is nothing about me that is any different than you and how a lifetime of working to make things better can enrich your life in ways beyond compare,” said Cathy Woolard, the state's first openly gay elected official who is now running for mayor.

“We have to reach out to people because now, with the Trump administration, with things going on in our state government, with things going on around the world, there are other people who aren't gay who want somebody to say, 'You're okay, I'm here, I'll be with you even if I can't fix it.' And we have the privilege of being able to help in that way,” Woolard added.

Ossoff, a Democrat running for Georgia's 6th Congressional District, pledged to stand “publicly and forcefully” with the LGBT community.

“You will be able to count on me to stand up for you every day. I will never shy away from standing with the LGBT community publicly, forcefully, with everything I've got,” Ossoff said. 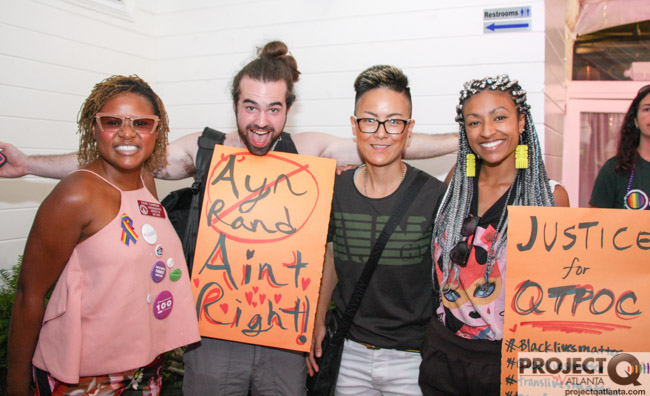 'That common cause is love and equality'

“This is a time, though, where there are many attacks on the things that are essential to our lives. There are attacks on women's health, queer rights, immigrant rights, folks who are not only Christians but understand that religion is a piece of them. And yet we continue to unite under a common cause. And that common cause is love and equality,” Cannon said.

Cannon also paid tribute to Joan Garner, the first-ever openly LGBT member of the Fulton County Commission and a mentor to her. Garner died April 18.

“Today I really hope that we can hold Joan with us as we march and as we walk so that she can see the work continuing to be done,” Cannon said.

Fort reminded the crowd that marches like the event on Sunday often help forge change on civil rights.

Park called attention to the diverse crowd, which included an array of racial and ethnic backgrounds, ages and sexual orientations and gender identities.

“From all different walks of life we have gathered here. Despite our differences, we stand here united ready to march for the equal rights of our LGBT brothers and sisters. And with persistence and determination, we will succeed,” Park said.

Bakhtiari, a self-described queer brown woman from an immigrant refugee family, told the crowd that even in Atlanta – a city that caters to its LGBTQ population – more can be done by the City Council.

“I want to make City Council more than a passive vote. We are a legislative body and we can draft up and fight for more protective rights for our community,” Bakhtiari said.

Mayoral candidate Mary Norwood participated in the march but did not speak at the rally.