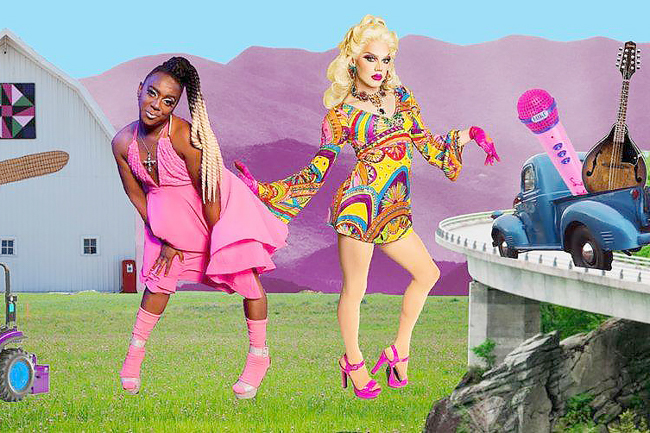 After showing the LGBTQ South how virtual fundraising shows are done back in April, Atlanta’s Wussy and Southern Fried Queer Pride teams rejoin forces for another Big Ass Telethon to End Metronormativity.

In case that last word is new, or you need a reminder, SFQP co-founder and telethon organizer Taylor Alxndr explains.

“We started hosting telethons to support Southern and Appalachian queer artists and to address this idea that LGBTQ+ folks only thrive in cities,” Alxndr told Q. “We started them because COVID-19 has really put a stop to seeing queer art in person, so we wanted to offer an outlet for that as well.”

To that end, Alxndr opens Sunday’s Big Ass Telethon 3, as they have its predecessor events— with a DJ set to create a fun mood.

“We’re actually going to be streaming from Mary’s, so it’ll be my first DJing in a bar since February,” they said. “I have so much new music to play – from recent bops like “WAP” to a lot of house deep cuts from the ‘90s that I’ve been collecting during quarantine.”

Hosts Ellasaurus Rex and Brigitte Bidet (photo left to right), as well as several of the more popular acts from past telethons, return for the third installment. Some first-time telethon singers, drag artists, queer celebrities and others will also offer live performances, pre-recorded performance videos, and old-school telethon style shout-outs. Some 30 entertainers will offer their voices and talents to the cause.

And that cause, supporting LGBTQ artists in the COVID era, has already benefited greatly. The first two telethons were so successful, organizers created the Southern & Appalachian Artists Fund.

“So far we have been able to give out about $12,000,” says Wussy Kingpin Jon Dean. “$6,500 of that has been through our micro-grant program, which will open up again for applications after the third telethon is over.

The producing groups take home no money from telethon proceeds.

“It’s always been a labor of love and something we’ve wanted to do for a long time,” Dean said, adding that anyone concerned about former telethon partner Queer Appalachia can rest easy. Accusations of embezzlement within that organization surfaced last month from projects and funds completely unrelated to the telethons, Wussy or SFQP.

“Queer Appalachia is no longer involved with this project,” he said. “We were just as shocked as everyone else to hear the accusations. They were part of the planning and promotion for the first two telethons, but never had access to the donations. We definitely value transparency and don’t want anyone to be concerned about where their funds are going.”

Onward and upward with an inspiring experience, said Alxndr, who has been touched and impressed by the telethon collaborations.

“The response has been great,” they said. “It’s rare that we experience space where so many Southern and Appalachians mix and mingle and share their pride in being from outside of the city.”

Beyond the telethons, SFQP has an ongoing campaign to open a community center by, for and about queers of color. Another round of that fund closed last week with $121,000.

“We’re going to continue to fundraise through the end of the year, as well as finding other sources of funding,” Alxndr said. “We have an LGBTQ+ day at ParkGrounds, a coffee shop and dog park, to help raise funds. More fun, interesting ways to fundraise are on the way as well.”

As for Sunday’s Big Ass Telethon 3, the choice to attend is simple, they added.

“Music, drag, comedy, and Southern goodness all from the comfort of your screen. Don’t miss it!”