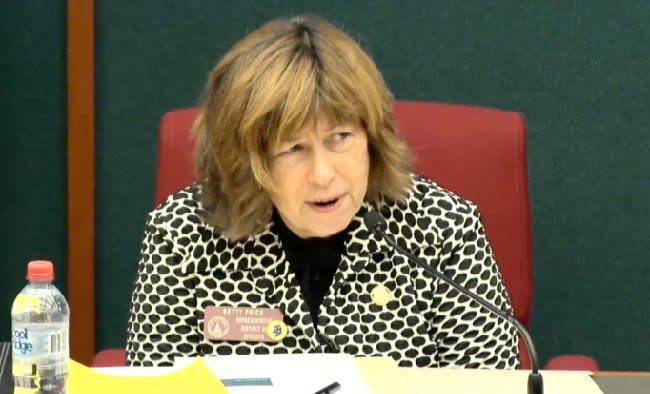 Rep. Betty Price – the Georgia lawmaker who suggested quarantining people with HIV – refused calls for her to apologize and instead said her “provocative and rhetorical” comments were misconstrued.

Price issued a statement on Saturday, a day after Project Q Atlanta first reported comments she made during a House study committee meeting earlier in the week. Price's comments touched off a national controversy and generated calls for the Roswell Republican to apologize and resign.

During a two-hour meeting of the House Study Committee on Georgians' Barriers to Access to Adequate Health Care on Oct. 17, Price asked if quarantining people was an option given how much the state spends on care for people with HIV.

“My thinking sometimes goes in strange directions, but before you proceed if you wouldn’t mind commenting on the surveillance of partners, tracking of contacts, that sort of thing. What are we legally able to do,” Price said.

“And I don’t want to say the quarantine word, but I guess I just said it. Is there an ability, since I would guess that public dollars are expended heavily in prophylaxis and treatment of this condition. So we have a public interest in curtailing the spread. What would you advise or are there any methods legally that we could do that would curtail the spread,” Price added.

Price later made other disturbing comments.

“It seems to me it’s almost frightening the number of people who are living that are potentially carriers, well they are carriers, with the potential to spread, whereas in the past they died more readily and then at that point they are not posing a risk. So we’ve got a huge population posing a risk if they are not in treatment,” Price said.

Price is a doctor and the wife of Dr. Tom Price, the former Secretary of Health & Human Services who resigned last month during a controversy over his use of expensive chartered flights.

On Saturday, Price said in a statement to the AJC that her comments were “taken completely out of context” and that she does not support quarantining people with HIV.

“I made a provocative and rhetorical comment as part of a free-flowing conversation which has been taken completely out of context. I do not support a quarantine in this public health challenge and dilemma of undertreated HIV patients,” Price said.

“I do, however, wish to light a fire under all of us with responsibility in the public health arena – a fire that will result in resolve and commitment to ensure that all of our fellow citizens with HIV will receive, and adhere to, a treatment regimen that will enhance their quality of life and protect the health of the public,” Price added.

On Friday, the reaction to Price's comments was swift. Chad Griffin, president of the Human Rights Campaign, called on Price to resign while scores of people demanded that Price apologize.

Betty Price should resign. This bigotry and ignorance from an elected official is beyond outrageous. https://t.co/gypLgu6FSD

State Rep. Park Cannon – one of four openly LGBTQ lawmakers in the Georgia House – called for an apology from Price, according to the AJC.

“She directly offended the LGBT community and needs to apologize for it,” said Cannon, who represents parts of Midtown and spoke before the race.

“I spoke to her two days ago and I asked her to come to the AIDS Walk with me,” Cannon told the Atlanta Journal-Constitution. “She said that she would be out of town and that she doesn’t have time to talk about it.”

“It’s very troubling to hear comments like that,” he said. “It shows the amount of work that still needs to happen to educate elected officials on the reality of the lives of people living with HIV. I’m hoping Rep. Price would be open to sitting down, meeting with folks, hearing how those comments sound, and recognizing that’s not the direction we need to go in.”

The full statement from Price to the AJC:

At a House Legislative Study Committee meeting this past week, we were exploring the difficult question of why Georgia ranks 2nd in the nation of new cases of HIV and why too many of our fellow citizens who have HIV are not compliant with the effective treatment of this now chronic disease. This is sad and troubling because we have come so far in HIV treatment, to the point where an HIV patient receiving recommended treatment is no longer able to transmit the disease to another person. This is something to celebrate, especially in stemming the transmission from a mother to her newborn baby.

During my entire professional career as a physician, my 10+ year service on the Fulton County Health Board, and the numerous public service roles relating to healthcare and medicine in which I have served, I have always strived to preserve the health and safety of patients and the public.

I made a provocative and rhetorical comment as part of a free-flowing conversation which has been taken completely out of context. I do not support a quarantine in this public health challenge and dilemma of undertreated HIV patients. I do, however, wish to light a fire under all of us with responsibility in the public health arena – a fire that will result in resolve and commitment to ensure that all of our fellow citizens with HIV will receive, and adhere to, a treatment regimen that will enhance their quality of life and protect the health of the public.

I look forward to continuing to work with all to accomplish this goal.