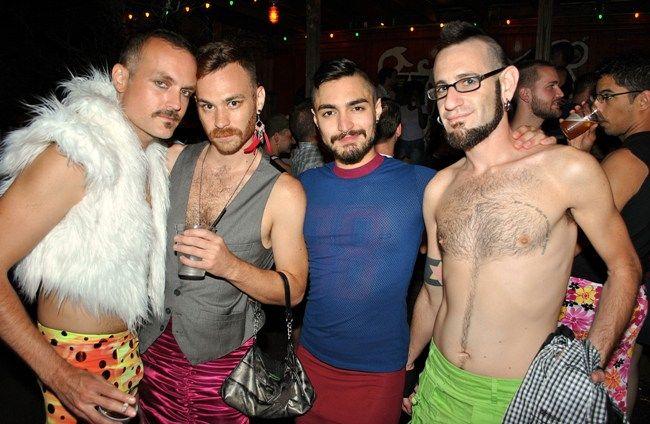 December dawns with holiday extras among LGBTQ Atlanta events. From parties to shows to World AIDS Day and beyond, the Queer Agenda calendar has you covered.

Mary’s 20th Anniversary (top photo). Not many gay bars can say there’s no other like it in the world, much less for two decades running. Celebrate the little rock and roll gay bar that can @ Mary’s, 9 p.m.

El Angel. Pedro Almodovar’s sexy new film full of intrigue is being billed as a gay “Bonnie and Clyde.” It run in an exclusive engagement @ Midtown Art Cinema, all week.

Daddy Issues. Mining masc stereotypes for inspo and them turning them on their ears, join DJs Vicki Powell and Sindri @ Heretic, 10 p.m.

Naughty or Nice. Saturnalia throws its latest theme party for the holidays with DJs Brett Oosterhaus and J Warren and a performance by Phoenix @ Heretic, 10 p.m. Meet the 14 sexy hosts, and check out what they did to Heretic last time.

Red Dress Tea Dance. With World AIDS Day as inspo, the dress code is obvious, and the giving back is just what you’d expect with Atlanta Sisters of Perpetual Indulgence @ BJ Roosters, 2 p.m. – 5 p.m.

Swing Into The Holidays. The MetroGnome ensemble from the Atlanta Freedom Bands group performs a seasonal set @ Cowtipper, 7 p.m.

The Kinsey Sicks. The queer band of long-standing performs from its latest “Things You Shouldn’t Say” record and are hosted by the LGBTQ Congregation Bet Haverim @ Saint Mark UMC, 8 p.m.

123 Getting’ Down with Britney. Gay fans of the pop princess celebrate her birthday with drink specials. Oh, and it’s Nelly Furtado and Charlie Puth’s birthday too, so they’re on the playlist as well @ Guac y Margys, 12:30 p.m.

Armorettes. The camp drag crazies with the hearts of gold against AIDS are in their 40th year of weekly shows @ Midtown Moon, 9 p.m. It’s the Past-Meets-Present Show as the group hurtles toward its 40thanniversary.