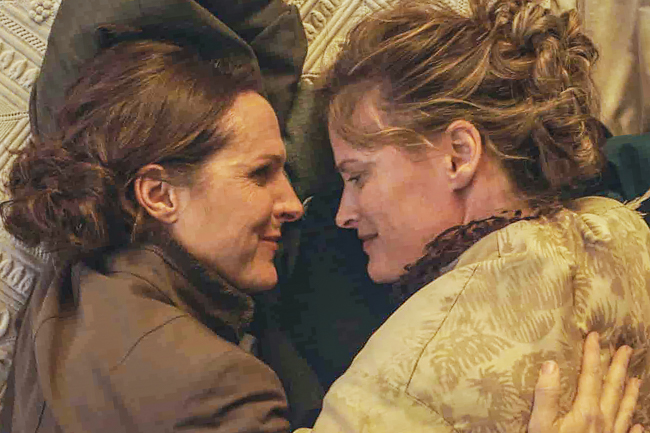 Movies, music and more mayhem and mischief make for another monumental weekend of LGBTQ events in Atlanta. Steel yourself, then keep scrolling to start making plans.

I Love To Eat. Legendary gay food personality James Beard, a gay director and gay lead make for a great one-man show @ Theatrical Outfit, 7:30 p.m. Runs through May 5. Tonight is Gays for Plays Night with a pre-party, 6:30 p.m.

Falsettos: Closing Weekend. A new kind of family emerges when a man leaves his wife for a guy in this musical, and a cast of characters including a lesbian couple become part of the thoroughly modern mix @ Actor’s Express. Runs through Sunday.

Mr. HSL (middle photo). This year’s theme is Kansas “Rock” City as the teams of Hotlanta Softball League stage their studs for a title and sash @ Heretic, 6 p.m. It is always an eyeful. Like, always.

Duluth Spring Arts Festival & Inman Park Festival. Two great tastes that taste great together. Head north for the one, intown for the other, and enjoy festival season both Saturday and Sunday.

Desire, Sex & Communication. Workshop it out with the folks @ Emory Office of LGBT Life, 10 a.m.

Atlanta United Tailgate. The gay pro soccer fans of All Stripes do pre-gaming festivities before the match @ Lot 1 “The Gulch” outside Mercedes Benz Stadium, 2 p.m. The game is also on TV @ Woofs, 4 p.m.

Drag Queen Story Time: Alpharetta. Read about what it took Terracotta Sugarbaker to get this event done, plus how the Mayor of Atlanta reacted, and then drive to support the event @ Alpharetta City Library, 2 p.m.

Duluth Spring Arts Festival & Inman Park Festival. Two great tastes that taste great together. Head north for the one, intown for the other, and enjoy festival season both Saturday and Sunday.

Atlanta School for Burlesque Recital. The spring show with these lovely ladies of this queer-led squad @ Rush Center, 7:30 p.m.

A version of this calendar originally ran in Q magazine. Read the full issue:

Pick up a new edition of Q each week at LGBTQ and allied venues across Atlanta. You can also check out our schedule of queer Atlanta’s best spring shows, soirees and specials through Memorial Day.