The best queer things to do in Atlanta Stonewall Weekend 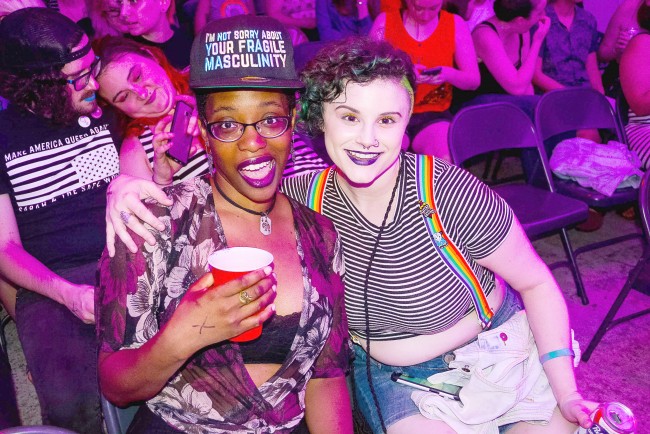 The Queer Agenda calendar is here for you every week, but this time, if you’re looking and can’t find a local LGBTQ event, you’re just flat doing it wrong.

Stonewall 50 Panel Discussion. Bank of America and Cox Enterprises present this discussion on the meaning and impact of the Stonewall Riots on the LGBTQ civil rights movement @ Center for Civil & Human Rights, 8 a.m.

Stonewall 50 Exhibit. The city and mayor host a weeklong retrospective on LGBTQ rights in Atlanta every day during business hours @ Atlanta City Hall, through June 28.

The Other Show: Pride. Edie Cheezburger, Jaye Lish and the cast bring their brand of drag to their new home @ Midtown Moon, 9 p.m.

Ladies Night. Get your weekend started with DJ beats, performances and scores of women in Midtown’s home for Atlanta lesbian nightlife @ My Sister’s Room, 9 p.m.

Mayor's Drag Queen Story Hour. Atlanta Mayor Keisha Lance Bottoms hosts Miss Terra Cotta Sugarbaker, whose event was canceled at a library OTP. Bottoms extended an invite in the aftermath for this version @ Atlanta City Hall, 10 a.m. For Stonewall this year, the City goes all out.

Doraville Pride. The first picnic of its kind in this Atlanta suburb @ Brook Park, 12 noon.

Dine Out for Pride & Stonewall Sign Making. Supplies provided while you prepare for Sunday’s march and a portion of your lunch bill goes to Atlanta Pride @ My Sister’s Room, 1:30 p.m.

Young Democrats of Georgia Pride. LGBTQ elected officials Stephe Koontz and Matthew Wilson hit the road to Athens to be part of a panel discussion @ Fire Hall No. 2, 5:30 p.m.

Yoon Nam. The multifaceted queer human presents their solo show “In My Dreams I Am Always An Antagonist” @ HiLo Press, 7 p.m.

The Ultimate Queen. The man who voiced Freddie Mercury in the Bohemian Rhapsody movie is the frontman for this tribute show @ Frederick Brown Jr. Amphitheatre, Peachtree City, 8 p.m.

Stonewall Pride with DJ Roland Belmares. Anybody could be that guy. See that gurl, watch that scene, they are the dancing queens @ Heretic, 10 p.m.

Stonewall 50 Party puts DJ beats on the decks and you in the spotlight @ Ten, 10 p.m

Southern Fried Queer Pride. Atlanta’s alternaPride turns five on the 50th anniversary of Stonewall with a contingent in the Stonewall March, 12 noon, and then the Heavy Syrup Tea Dance @ The Bakery, 4 p.m.

Heifer Review. Ruby Redd corrals the queens on the patio, this week with the bonus of being HSL’s Extra Inning Beer Bust @ Joe’s on Juniper, 1 p.m. and 4 p.m.

The Neon Queen. The ABBA tribute band you didn’t know you needed but so did @ City Winery, 6 p.m.

Pick up a new edition each week at queer and LGBTQ-friendly venues around town, and check back every Thursday for the latest Queer Agenda of weekend events. You can also check out our schedule of queer Atlanta’s biggest and best summer shows, soirees and special guests through Labor Day.