Best queer things to do in Atlanta on Easter Weekend 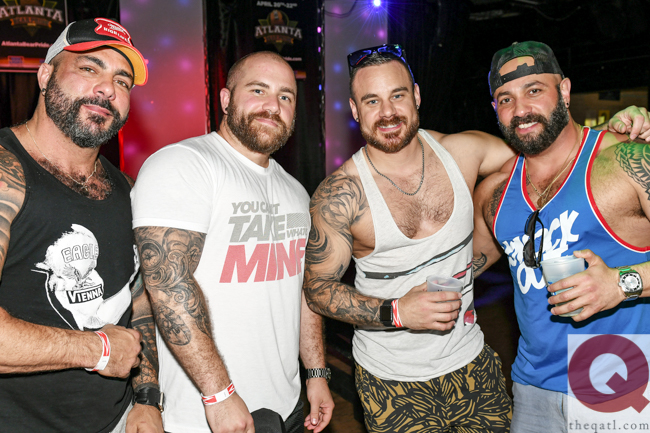 It's Easter. It's Bear Pride. It's a lot. Don't be overwhelmed though. the Queer Agenda calendar has your back with details on both, plus several dozen other options for the long weekend.

Falsettos. A new kind of family emerges when a man leaves his wife for a guy in this musical, and a cast of characters including a lesbian couple become part of the thoroughly modern mix @ Actor’s Express. Runs through April 28.

Nonsense Dance Party & Egg Hunt. Everybody’s favorite straight-inclusive party takes on the holiday weekend with pop, disco, and house @ The Basement, 11 p.m. Easter themes are hoppin’ and poppin’ across the LGBTQ-ATL all weekend.

NFFLA Flag Football. The queer and allied jocks of National Flag Football League of Atlanta continue their spring season @ Silverbacks Park, 9 a.m. – 2 p.m. Then you better be ready for the Bring It To The Runway Ball & Overtime Margarita Bust @ Las Margaritas, 4 p.m.

Atlanta United Tailgate. The gay pro soccer fans of All Stripes do pre-gaming festivities before the match @ Lot 1 “The Gulch” outside Mercedes Benz Stadium, 12 noon. The game is also on TV @ Woofs, 4 p.m.

Glitz & Glam with Charlie Brown.T he self-titled Bitch of the South and her girlsentertain with dinner and a show in the theater experience of Atlanta’s drag restaurant and bar. Make reservations @ Lips Atlanta, 6 p.m., 9 p.m. and the Taboo Show at 11:30 p.m.

Easter Swank. The Easter weekend edition of this lesbian cocktail blowout @ Henry’s, 9 p.m. Easter themes are hoppin’ and poppin’ across the LGBTQ-ATL all weekend.

Big Gay Easter (bottom photo). The holiday’s always been gay af, but it hasn’t always included so many options. Read our preview of the Atlanta's best queer Easter things to do.

Big Basket Ball invites you to “go at it like rabbits” with Easter brunch through 3 p.m., pus DJ beats, electric lemonade and free entry with bonnet at Bulldogs.

Sugar with DJ Russ Richreturns with dancing queens and circuit queers for the second year at Loco Luna, 4 p.m.

Cockfight. Get in on the ground floor of this sexy un-executed new pilot with a table reading @ Robert Mello Studio, 5 p.m.

A version of this calendar originally ran in Q magazine. Pick up a new edition each week, and read the full issue here:

You can also check out our schedule of queer Atlanta’s best queer spring shows, soirees and specials through Memorial Day.