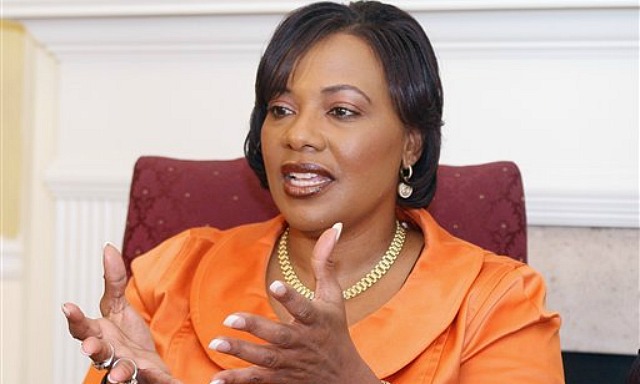 As Bernice King celebrates the holiday honoring her father, her track record of gay intolerance is again causing heartburn. And now she's misleading critics about it hoping to convince them that she's not a bigot. (She is.)

King's outspoken opposition to gay marriage is matched by the offensive way in which she dismisses LGBT equality as a "preference" and tries for political cover by saying she's got gay friends. Even if King, a minister and CEO of the King Center in Atlanta, would not marry them.

That caused some college students in Oregon to protest her visit to campus next month.

“Folks in the community definitely have some issues with the comments (King) has made about LGBT issues in the past,” said Khalil Edwards, the head of the Portland Friends of Lesbians and Gays Black Chapter. “That was really the reason we wanted to talk to folks at PSU, to share our concerns and get some understanding as to how that decision was made. People have been hurt by those comments and those actions in the past”

But administrators at Portland State University gave King a pass after misstating her views on gay issues.

"Bernice King understands the concerns that people have over the march a decade ago to protest gay marriage. Since that time, however, she has changed her views and would not participate in such a protest today. A Baptist minister, Dr. King still has private religious concerns but no longer publicly opposes gay marriage."

Except that's not true. King walked hand-in-hand with anti-gay (but apparently gay sexing) Bishop Eddie Long in 2004 to oppose gay marriage. She hasn't let up since, continuing her public drumbeat again same-sex unions.

So how did Portland State administrators conclude that King's changed her stance on gay marriage? From her staff, according to Jilma Meneses, chief diversity officer at the university.

Was King's history of negativity toward the LGBT community a part of the discussion about whether to invite her?

Initially we didn't know about that history. We understand now the concerns that people have over the march that she participated in a decade ago, but nonetheless we learned about it, and we talked about it and decided that we would still invite her after we spoke to her staff and I asked them how that evolved. My understanding... is that she would not participate in a march like that today.

Yet a quick Google search would point to King's odd interview last year with Atlanta magazine in which she made her anti-gay views pretty clear. Even her Wikipedia page shows that last year King spoke out publicly against gay marriage.

In 2004, Bernice King participated in a march against same-sex marriage in Atlanta. This action was in contrast to the advocacy of her mother, Coretta Scott King and her older sister Yolanda Denise King, both longtime, outspoken supporters of gay rights. During Atlanta's 2012 Martin Luther King Jr. Day rally, King included LGBT people among the various groups who needed to come together to "fulfill her father’s legacy." When speaking at Brown University in 2013, King made statements regarding her beliefs about the origins of marriage: "I believe that the family was created and ordained first and foremost by God, that He instituted the marriage, and that's a law that he instituted and not... that we instituted" and about the origins of same-sex attraction: "I also don't believe everybody's born that way. I know some people have been violated. I know some people have unfortunately delved into it as an experiment".

In regards to her view of her father's legacy, she has publicly stated that he would have been against gay marriage.