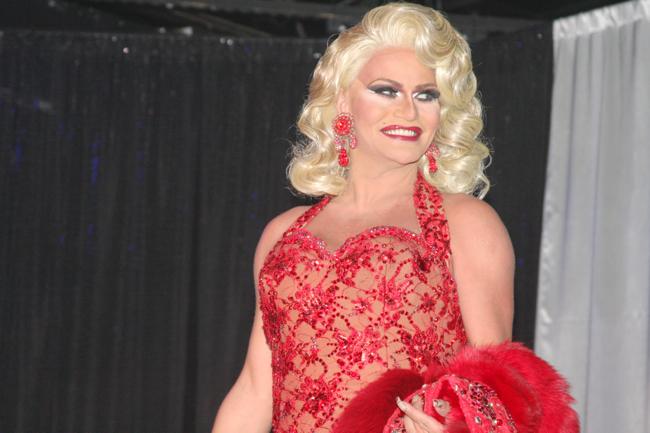 Fans, friends and supporters of Atlanta drag queen Ashley Kruiz raised more than $1,000 for the seriously ill performer as they look ahead to a fundraiser to help offset her mounting medical bills. Fellow drag performers started collecting donations at their shows over the weekend, raising hundreds, and plan to continue this week. Brian Harmon, a longtime friend of Kruiz and fellow drag performer, says more than $600 was collected during various shows and nearly $400 was donated through PayPal. Kruiz, the show director at Burkhart's who once performed with Atlanta legend Charlie Brown during her cabaret at Backstreet, has been hospitalized in Grady's Intensive Care Unit since at least March 18. Friends say she's battling a lung infection and two types of pneumonia. Harmon continues to post updates to Facebook about Kruiz's condition, including one on Tuesday:

Drs tried again to remove her from the ventilator, but were unsuccessful. When lowering her sedation and trying to remove the tube her vitals drop too low. They will be attempting again tomorrow. Keep the prayers coming and thanks to each of you that have sent donations.

Burkhart's is planning an April 3 benefit show for Kruiz. A lineup hasn't been announced, but expect that it will include scores of fellow performers and cast members from the bar's shows.

Ashley has given much to the community and this is our chance to give back. All donations will be used to help offset personal and medical expenses. Please keep Ashley in your thoughts and prayers during this difficult time. Thank you for your support.

Phoenix, who last week asked her Facebook fans to help Kruiz, says she will continue to collect donations during Drag maniacs on Wednesday at Jungle and Dancefloor Divas at Burkhart's. Nearly $550 was raised during those two shows last week, she says. "A big thanks to everyone who has helped whether it be a fellow showgirl, a fan, bar owner, whoever," Phoenix tells Project Q. "I've known Ashley now for over 10 years and she was one of the reasons I got into this business. It's very easy to turn your back when you don't know someone on a personal level but not in Ashley's case. The love, support and donations keep coming in. Thanks again to everyone across the country." Nicole Paige Brooks, who has visited Kruiz in the hospital, also collected donations during her recent shows and says that won't stop. "We're taking money until Ashley is back at work," she says. "Not sure how much has been raised but I know she could use all the help she can get, so please don't stop giving. There is no improvement in her condition so please continue to send love prayers and money if you can." Donations to help Kruiz can be made via PayPal to [email protected], the email address of Nancy Kasey, Kruiz’s close friend and roommate. Well wishes and donations can be mailed to Kruiz via Kasey at 3078 Clairmont Road NE, Apt. 311, Atlanta, GA 30329.