You already know that rugby stud Ben Cohen is in Atlanta this week. As close as you get at one of his three gay StandUp Foundation fundraisers, you still probably won’t see as much as he shows in this teaser for his 2013 calendar shoot. 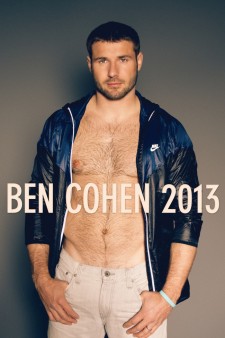 Go ahead and click the video above to see Cohen behind the scenes and sexy as hell for the calendar (photo, right) that puts the player’s best assets on display in his StandUp underwear line. The calendar, and everything in the video but Cohen himself, is for sale to raise funds for his Atlanta-based anti-bullying foundation.

From what we can tell, it’s even sexier than his 2012 calendar (view photos), just as scrummy and yummy as his 2011 calendar and a little less all-wet than his 2010 calendar. Not that we’ve been keeping track. No, not at all.

Once you’re all warmed up with the video, be sure to check out Cohen in the flesh at his three remaining Atlanta appearances. He was guest of honor on Wednesday at David Yurman Jewelry in Lenox Square, and he continues his local September tour as the featured guest at two gay-owned Atlanta businesses: Thursday’s StandUp This Fall! at the swanky Mitchell Gold + Bob Williams store, and Saturday’s Rockabilly Hair, Tattoo & Fashion Show at Urban Body Studio. Both events benefit the foundation’s fight against bullying.

This just in: Cohen will also participate in Atlanta Field Day on Saturday. The morning of big gay egg tosses, sack races and other school-days games benefits Jerusalem House and Camp Twin Lakes. The StandUp Foundation has a team entered in the games, and with Cohen in their midst, he’s likely to become the team’s MVP.

That makes Cohen three of the Best Gay Things To Do In Atlanta This Weekend.

And don’t fret if you miss him. The gay ally and British stud returns for Atlanta Pride next month. Yes, we’re sure. Cohen is an honorary Atlanta Pride parade grand marshal, after all.