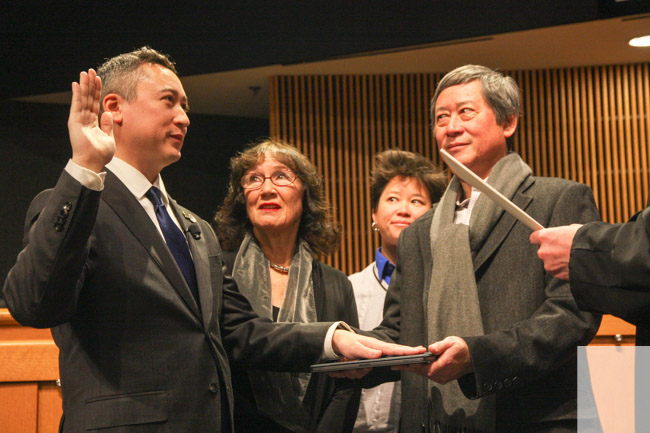 Friends, family and elected officials were on hand Friday to witness Ben Ku get sworn into a spot on the Gwinnett County Commission — the first Asian-American and first openly LGBTQ person to do so.

Following his being sworn in by Gwinnett Probate Court Judge Christopher Ballar, Ku (top photo, left) recounted his journey from his birth at Piedmont Hospital, education at Paideia School and Georgia Tech, and professional career as a software engineer.The event was held at the Gwinnett Justice and Administration Center on Dec. 21.

Ku, 36, said he was invited to a political event a year ago by his friend Adam Wynn, a gay entrepreneur who was in the midst of a campaign for Congress before switching to run for a state House seat in Canton. Ku ran into state Rep. Brenda Lopez, who had gotten to know him during her campaign for the seat in Norcross. She encouraged him to run for the District 2 spot on the Gwinnett commission.

“I talked with my family and some friends, and I realized that part of the reason I hated politics was because as a minority engineer, there weren’t many politicians that I could really relate to,” he said. “I had the ability to run and I knew that if I wanted to have that, it was my duty to step up.”

Ku was brought to tears by Sarah Riggs Amico, who got to know him during her run for Georgia lieutenant governor and who Ku asked to speak at the event. She pointed out the history he was making just as Gwinnett is celebrating its bicentennial.

“We know that it means somewhere, a young man who looks like you, who maybe thinks like you, who wants to go to Georgia Tech like you did, who may choose to love like you, now sees their face — a representation of who they are — in the halls of power. Seated at the table not only with a voice but the opportunity to make a difference,” Amico said.

“Because of you, little girls and little boys — no matter what they look like or who they love or how or if they pray or how much money they have — will be that much closer to believing that whomever they are, they belong at that table,” she added.

Their first meeting as commissioners will take place Jan. 3.