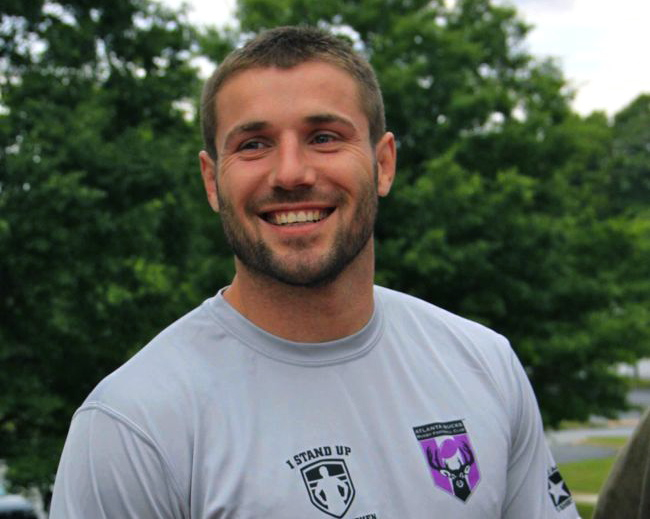 Atlanta Pride added to its existing list of eight local parade grand marshals with Honorary Grand Marshal nods to rugby stud Ben Cohen and Harvey Milk Foundation’s Stuart Milk, the gay rights icon’s nephew. The two will ride in the annual parade down Peachtree Street and Piedmont Avenue on Sunday, Oct. 14 . Gay Atlanta knows and loves Cohen (top photo). Very well. The British hunk and LGBT ally marched in Atlanta Pride last year with the gay Atlanta Bucks rugby team after headquartering his anti-bullying StandUp Foundation here. He was just here in June for a “Legalize Gay” screening and back two weeks later to throw out an opening pitch (watch) during Out in the Stands LGBT Night with the Atlanta Braves. 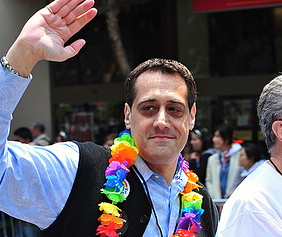 His accomplishments are many, but we can't help but wonder if he’ll ride in the parade wearing just his new StandUp underwear. Cause you know, he knows the gay guys like to look at him half-dressed. A lot. A whole lot. Haven’t heard of the younger Milk (bottom photo)? Well, he’s in charge of his uncle’s legacy. He got California to mark Harvey Milk Day and accepted Uncle Harvey’s posthumous medal from President Obama, among other things. For more on Cohen and Milk’s accomplishments for LGBT equality and visibility, read Pride’s entire announcement:

Ben Cohen: Ben Cohen, MBE, is among the world's greatest athletes. He is an England Rugby World Cup champion, and second in all-time scoring for his country. He is first among straight athletes to focus his philanthropic efforts for the benefit of LGBT people. In May 2011, Mr. Cohen retired at the top of his game to found the Ben Cohen StandUp Foundation. As Chairman of the Foundation, Mr. Cohen travels worldwide speaking to students and corporations about the importance of character, respect and equality in creating a kinder world. The cause is close to his heart, as Mr. Cohen's own father was beaten to death when he stood up for an employee who was being attacked. Mr. Cohen has reached millions of people with his message through global media coverage, films and nearly 300,000 followers on social media. With his leadership, cities across the United States have passed StandUp declarations, calling for an end to bullying. Working with the UK Home Office, he has led the charge for the StandUp Charter to end homophobia across sports in his country, including broad adoption to date in soccer, rugby and tennis. Stuart Milk: Stuart Milk is an international human rights activist, diversity consultant, and LGBT advocate. He is the co-Founder and Board President of the Harvey Milk Foundation, an all-volunteer run global non-profit. As the nephew of Harvey Milk - the iconic civil rights activist and one of first openly gay elected officials in the world - Stuart has taken his uncle's message of authenticity, example of courage and the power of collaboration onto the global stage supporting local, regional and national human rights struggles on five continents. He successfully led campaigns for the establishment of the now official annual Harvey Milk holiday in California along with Milks induction into the California Hall of Fame by Governor Arnold Schwarzenegger and he accepted on behalf of his uncle the highest civilian honor in the US, the Medal of Freedom, from President Barack Obama. He continues to lead efforts to have the diversity affirming legacy of Harvey Milk taught in public schools, memorialized on buildings, LGBT Centers, monuments and parks worldwide. Stuart has provided major public addresses before dozens of Parliaments and legislative bodies, lectured at leading Universities, in faith communities, before board rooms and at public rallies across the world. He has led collaborative national and international congresses on minority inclusion, diversity education, and workplace acceptance. Having over two decades of leadership experience in both public and private workforce programs, Stuart often consults with business and community organizations finding the intersection of economic growth and social progress. He has been widely recognized with numerous national and International awards as one of the most tireless advocates of a globally inclusive LGBTI rights movement. Stuart also serves on the boards of Equality California, the American Foundation for Equal Rights (AFER), Marriage Equality USA, the International Conference on Disadvantaged Youth (ICDY) and he is co-Chair of the Beyond Tolerance Global Initiative. Atlanta Pride Board Chair, Glen Paul Freedman said of the selections, “We are honored to have these international leaders for the LGBT community participate in Atlanta Pride this year!” Ben Cohen said of the nod, “I am thrilled to have been named one of the Honorary Grand Marshals for this year's Atlanta Pride Parade. As the home of the Ben Cohen StandUp Foundation, this city [Atlanta] has special significance, and it will be great to celebrate equality and unity with the community that I consider my home in the States.” Ben’s fellow honoree, Stuart Milk, noted, “I am thrilled to have been invited and look forward to the privilege of joining the greater Atlanta region in celebrating [your] 42nd Pride! Atlanta Pride is such a vital venue to showcase a community’s broad and inclusive leadership and at the same time, provide an important and often life changing event that, at its core says to each young person - you are not only valued, but your authenticity is celebrated here - you are not alone.” Freedman added, “Both of these individuals work tirelessly for our community, both nationally and abroad- it is a pleasure and a privilege for Atlanta Pride to recognize and honor them for that work.”