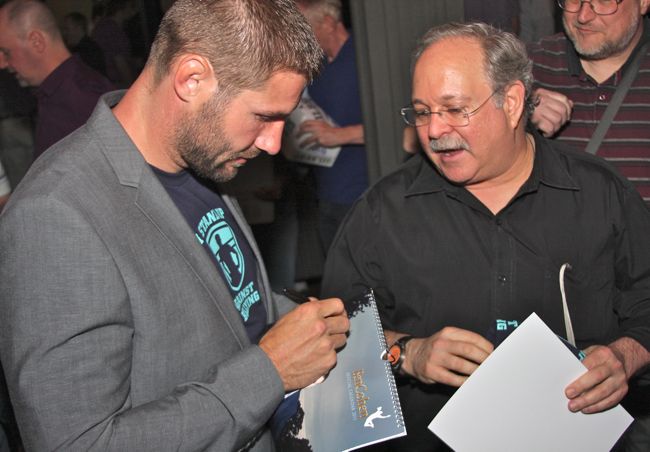 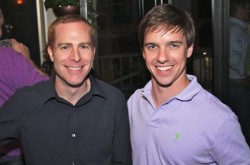 English rugby stud Ben Cohen kicked off his U.S. tour in Atlanta on Thursday and then made big news: He’ll base his new anti-bullying organization right here. Atlanta is the first stop on Cohen’s four-city tour to promote the Ben Cohen StandUp Foundation, though the rugby star – who announced his retirement earlier this month – has been in Atlanta since May 15, offering tips during a practice session with the gay Atlanta Bucks Rugby Football Club, talking to students about bullying, doing a photo shoot, and marking the first public event of the tour on Thursday in Buckhead. That’s when Cohen joined the Bucks, his host in Atlanta, for a meet and greet at Fado Irish Pub. He signed autographs, hugged fans, posed for photos and otherwise talked up his efforts to establish the StandUp Foundation, which is being billed as the first organization to combat bullying. 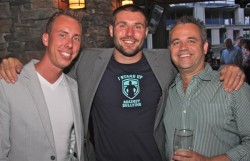 On Friday, he dropped this bomb: He’ll partner with the Human Rights Campaign, Campus Pride, Matthew Shepard Foundation and Trevor Project to build his foundation and headquarter it and his commercial Ben Cohen USA right here in Atlanta. “Atlanta is now known as ‘the gayest city in America’ and has long been known as the ‘city too busy to hate’ due to its civil rights leadership,” Cohen says in a prepared statement. “I can think of no better place to base our operations and make the differences we intend to make.” Patrick Davis, a member of the Bucks and president of Ben Cohen USA, says the anti-bullying message of the new foundation is already attracting interest. 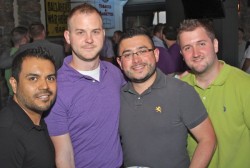 “The inbound calls from major US corporations, consumer packaged goods, and beverage brands interested in StandUp partnerships have been tremendous,” Davis says in a prepared statement. “This is the right message and the right brand at the right moment in our culture. The anti-bullying platform is universal, and people will be able to support it in a number of ways, from donating to shopping.” On Thursday, Cohen displayed the rugged good looks and easy charm that has helped win him scores of gay fans. He proved to be an engaging and enthusiastic advocate for the new foundation, of which he will serve as chair. “If people find me attractive and that helps them pay attention and hear my message of acceptance, then I am honored by it,” Cohen says in the statement. “Every human being has the right to love and be loved, and I want to be a bridge between LGBT and straight communities to create a kinder world.”