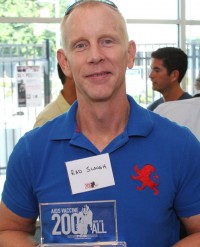 Popular gay-owned gym Urban Body Fitness is hiking across Midtown to a new home, ousted by an impending (and imposing) Beltline project, the much discussed but slowly emerging network of parks, trails and transit.

Faced with a shrunken parking lot for his current, upscale facility on Ponce de Leon Place, owner Rad Slough (photo) opted instead to pull up roots for the gym and move operations to Amsterdam Walk and the luxury of nearly 300 parking places, according to What Now Atlanta?

It seems the Beltline, the route of which runs behind Urban Body, reclaimed some land and took with it critical parking spaces.

Urban Body Fitness was forced to plan for relocation when the Atlanta Beltline project reclaimed the gravel area Urban Body was using as their parking lot.

Owner Rad Slough was facing the possibility of running a popular gym, known for their energy spin and group fitness classes, with absolutely no parking and had to make a difficult business decision.

Announced early October, Slough was able to secure 15,000 square feet worth of space at Amsterdam Walk in Midtown.

Slough hopes to have the new gym open in mid-December, with Urban Body Studios staying put at Ponce Place. But burned by one massive city project, Slough now gets to experience the city’s bureaucracy at work again: He’s facing some troubles with permits for the creation he’s trying to construct at Amsterdam Walk and posted about it on the gym’s Facebook page.

we will have to stop and wait on the City pretty soon… the master permit for the construction is still “waiting” on approval….

The city really should watch out. This is, after all, the same gay that armed himself with a gun to put a stop to a string of burglaries that plagued Urban Body in 2009.

Once tucked into the new facility, we can only hope that Slough – a cyclist and avid supporter of the charity Action Cycling Atlanta – will again hold a fundraiser like this with the help of shirtless firefighters.