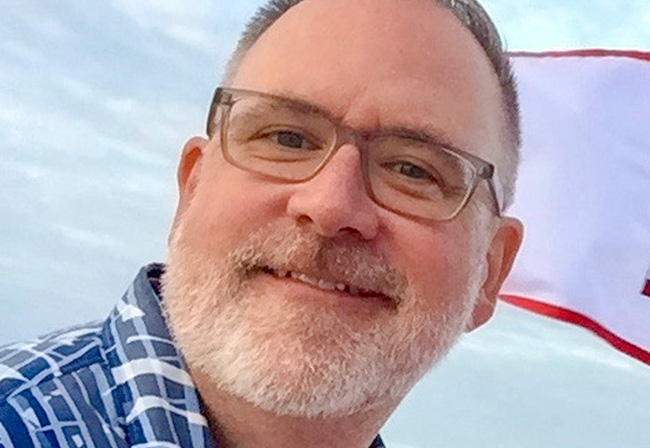 Friends, colleagues and loved ones are mourning the sudden passing of HIV health educator, activist and advocate for the homeless Peter Stinner.

Stinner died of a heart attack while in the arms of his husband, Jeff Graham, at their home on Aug. 16. A celebration of life is in the works and a scholarship fund has been set up in his memory.

Stinner made his mark in HIV care over the last 20 years as a health educator at Grady Health System’s Ponce de Leon Center. He was a “master” of his job who impacted thousands of lives, according to Wendy Armstrong, medical director for the Infectious Disease Program at the center.

“He was compassionate, patient and able to explain the biology of HIV to anyone, no matter how long it had been since they had had a science class,” Armstrong told Project Q Atlanta. “He gave people hope and introduced the clinic to our patients. In short, he armed them with knowledge while letting them know they had a team behind them.”

Stinner’s passion for helping others started much earlier in life.

Peter Lamar Stinner was born on Sept. 10, 1965 in Houston, Tex. He was born with a medical condition that required radiation therapy, Graham said.

“He was very proud of the fact that he was written up in a medical textbook in the ‘60s as this miracle baby that had survived treatment,” Graham said.

Stinner and Graham met as students at Trinity University in San Antonio, Tex. They started out as friends, then Stinner moved to Atlanta after graduation to work with the homeless at the Open Door Community. Everything changed for the two when Graham came to visit him in 1988.

“He professed his love to me, and I laughed and said, ‘Why would we want to ruin a perfectly good friendship?’” Graham said. “But before I left town, he had convinced me I should give it a try.”

Stinner proposed to Graham on New Year’s Eve of that year, leading Graham to drop out of graduate school and move to Atlanta the following year.

That kicked off a three-decade relationship with deep roots in activism.

‘The activism was very real’

Stinner was arrested along with several other members of the Open Door Community for protesting at the opening of Underground Atlanta in 1989. They felt the city was focused more on building an entertainment complex than helping the city’s homeless, according to Graham.

“They chose to stay several days in jail as opposed to posting bail and being released so they could more fully experience what it was like for folks that were arrested simply for being homeless and not asserting the privilege that a lot of mostly white people can do when they do civil disobedience,” Graham said.

The pair then both got involved with the AIDS action group ACT UP, participating in a number of demonstrations leading to several arrests for the pair over the years. The highest-profile one came in the early 1990s when Graham, Stinner and two other activists split off from a CNN Center tour and interrupted a live broadcast of CNN Headline News, chaining themselves to the cameras. They were protesting CNN’s coverage of a woman who claimed she contracted HIV from her dentist.

“We felt that CNN really needed to be doing a better job of educating people of the fact that oral transmission of HIV was just a theoretical thing,” Graham said. “It was the beginning of a more widespread panic, and CNN had an obligation to tell the truth of what was happening.”

The pair also worked on campaigns to get greater access to clinical HIV trials and protested at the Republican National Convention in Houston in 1992.

“The activism was very real. It was very much something that the two of us did together,” Graham said. “Eventually it was a career path that both of us had. It was a very special time for us to just be in the HIV community together as a couple, but also people that had independent lives and roles that we filled.”

The path to Grady

Stinner started his career in HIV education as a volunteer with Atlanta’s AIDS Survival Project in 1990. He later became certified to do HIV testing and counseling, and was hired by Mercy Mobile. In 2000, he was offered a job overseeing the training of HIV test administrators and counselors in the HIV division of the Georgia Department of Human Resources.

“It was an opportunity for a career promotion for him, and we had a lot of conversations about that, but he eventually turned that down because it wouldn’t allow him to interact with people one-on-one, and that’s what his passion really was,” Graham said.

So Stinner took a job at Grady Health’s Ponce de Leon Center instead, spending the remainder of his life there educating people with HIV. His compassion for the job came from his own battle with medical issues, Graham said.

“He was fascinated with being an educator and being able to translate medical treatments and getting people to understand the science behind HIV and AIDS because it was so important to him to understand his condition,” he said.

“Together with his partner in life and partner in activism, Jeff Graham, the two created ‘good trouble’ in the fight for LGBTQ+ equality, human rights for all people and access to quality care for people living with HIV/AIDS,” he wrote on Facebook.

Melanie Thompson, principal investigator for the AIDS Research Consortium of Atlanta, said Stinner made an impact on HIV care at several institutions, but Grady was “his true home.”

“His gentle manner and humor and his dedication to helping people living with HIV was legendary,” she said. “I never saw him when he didn’t have a big smile and sparkling eyes, and that’s how I will remember him.”

Armstrong called Stinner “a solid anchor” for many at Grady.

“He was always calm despite the chaos around him,” she said. “He had an easy smile, tremendous patience and was incredibly humble. But he was also someone with tremendous courage who was always true to his values. He was a role model – as an advocate, as a husband and as a human. He is already so missed.”

Stinner’s co-workers held a celebration of his life (third photo) outside the Ponce de Leon Center on Aug. 27.

Celebration of life in September

Stinner struggled with various health issues over the last few years, and they made it harder for him to work full-time in the last five months, according to Graham.

“Doctors weren’t able to identify anything specific,” he said. “So what happened [Aug. 16] was very unexpected.”

Graham is working with Rabbi Josh Lesser and Rev. Duncan Teague to hold a virtual celebration of life on Sept. 10. The date would have been Stinner’s 55th birthday.

Graham also set up a scholarship fund in memory of Stinner at Trinity University’s religion department, where both majored. It supports students interested in projects or careers in social justice.