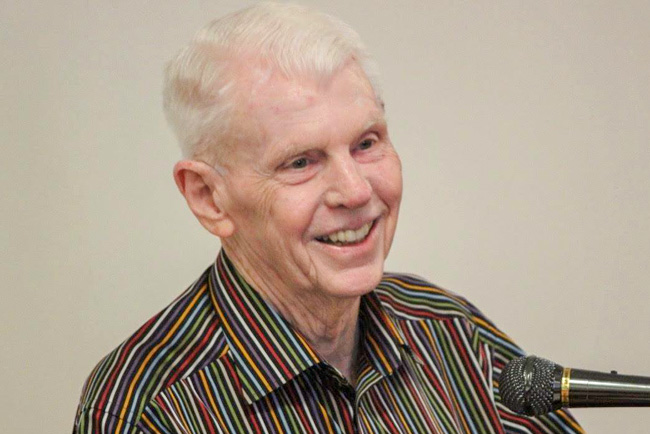 Friends across LGBTQ Atlanta are mourning the death of Navy veteran, HIV/AIDS activist and political trailblazer Richard Rhodes, who died Saturday. A memorial service is scheduled for Aug. 3.

Rhodes, 81, had a stroke on July 12, according to friend Jimmy Robertson. A series of visitors were by his side in the following days at Grady Memorial Hospital and then at Harbor Grace Hospice, according to updates posted to Rhodes’ Facebook page. Rhodes’ friend Larry Mock announced his death on Saturday.

“The world has lost a great man, and we all lost a great friend,” Mock wrote. “Richard has completed his earthly journey, and he is now released into the universe for the journey he has earned — the one of eternal peace. Cherish all of your fond memories spent with this wonderful man.”

Rhodes was born in Tampa, Fla., on Aug. 14, 1937. He served in the U.S. Navy in the late 1950s aboard the USS Lexington stationed in San Diego, according to Emory Medicine Magazine.

He survived the persecution of the Johns Commission in Florida in the mid-1960s, according to Hayward.

“A version of the Joseph McCarthy witch hunts of the 1950s, the Johns Commission specifically targeted gay men by hounding them at gay gathering spots, including gay bars, and entrapping them by sending undercover police officers into the men's rooms,” Hayward wrote Project Q Atlanta following Rhodes’ death.

“Richard would laugh and say they always sent the ‘hottest’ police officers into the men's rooms to ensnare the patrons,” Hayward added.

Making a mark in Atlanta

Rhodes moved to Atlanta in 1971. He was a delegate to the Democratic National Convention in Atlanta in 1988 — the first openly gay male to do so. While mingling there, he got the bug to run for office, according to a Georgia Voice interview in 2012.

“I thought, well, damned, I’m as smart as they are,” he told the paper at the time.

That year, he and Gil Robison became the first openly gay men to run for the state House. He finished fifth in the Democratic primary and never ran for office again, according to Georgia Voice.

But he stayed active in politics, becoming the first openly LGBTQ chair of the DeKalb Democratic Party in 1993.

Rhodes was a founding member of LGBTQ social groups SAGE Atlanta and Atlanta Prime Timers, according to Emory Medicine Magazine.

“He jokes that if you want to know anything about being old and LGBTQ in Atlanta, come to him,” Hayward told Project Q.

He also co-founded the LGBTQ Archives and Special Collections Committee and was recently active in LGBTQ social group Belong and at Spiritual Living Center of Atlanta, according to Hayward.

The Atlanta Gay & Lesbian Chamber of Commerce honored Rhodes with a lifetime achievement award in 2012. The group mourned Rhodes' passing in a Facebook post on Monday.

Rhodes was diagnosed with HIV at age 65, and in the ensuing years shared his experiences living with HIV, according to Emory Medicine Magazine.

“HIV hasn’t limited me in any way,” he said. “I wake up every day and take my diabetes medication and other meds, but I don’t even think about having HIV, maybe because I don’t have any bad symptoms. In spite of all the things that are wrong with me, I live life to its fullest.”

Rhodes fought for LGBTQ rights to the end, lobbying for an LGBTQ-inclusive nondiscrimination ordinance earlier this year in Brookhaven.

“I have addressed it before the council for the past two months, given the mayor, council and city attorney copies of the three city ordinances that have passed it recently,” he told Project Q in April.

A memorial service for Rhodes will be held Aug. 3 at 2 p.m. at Spiritual Living Center of Atlanta, according to Mock.

UPDATE | Mayor Keisha Lance Bottoms and the City of Atlanta issued a Phoenix Award in memory of Rhodes on Aug. 3, according to a Facebook post by the city's LGBTQ Affairs office.

“Rhodes was a trailblazing advocate in the fight for LGBTQ equality,” the post said. “We salute the everlasting impact he has made on our great city.”