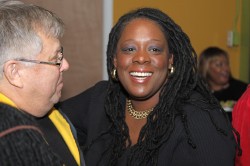 For Alex Wan, it’s back to work at a non-profit. Simone Bell hopes to relax while watching “Elizabeth.” That’s how two gay candidates will spend the day after their historic victories.

Wan scored a 20-point win over Liz Coyle, 60 to 40 percent, to take the District 6 seat on the Atlanta City Council, continuing a 12-year history of the area being represented by a gay candidate. In the process, Wan also becomes the first openly gay man and first Asian American elected to the city council.

Bell (top photo) also made history by winning the special election for the District 58 seat in the state House. The 62 to 38 percent victory over Asha Jackson makes Bell the second lesbian in the Georgia General Assembly and the first African-American lesbian to win election to a state legislature in the U.S.

But for both candidates, it was less about making history and more about engaging supporters and convincing voters they were the best choice in two highly competitive races.

“I talked to Simone earlier [Tuesday] and said let’s make it two for two and make some history,” Wan says during an interview late Tuesday at his victory party at Cowtippers. “She held up her end of the bargain first, and I’m happy to help hold up mine. I don’t really think about the history part of it. I think I just ran a very solid campaign based on the issues and my qualifications. At the end of the day, the voters of District 6 believed that I can do the job.”

Bell, who huddled with supporters at the Phillip Rush Center to watch results Tuesday, says the campaign stuck to its plan and inspired people to join their first political race.

“We feel really good about the work that’s been done,” Bell says. “We have walked miles and knocked on doors. We’ve talked to people that we’ve persuaded to vote for us by sticking with the issues. We brought so many people to the political process who have never been involved before. Folks are energized and engaged. The fact that our campaign has inspired people to do that is a win.” 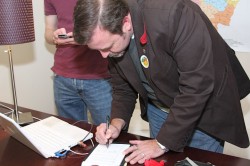 “Part of what makes it so exciting, in addition to being historical, is that both victories were so decisive,” Graham says. “The other part of their wins that really gives me hope for the future is the number of new people, especially people of color and transgender individuals, that were involved in those races. To be able to engage a new segment of our community in the nuts and bolts political work of winning campaigns gives great promise to the entire LGBT community in the future.”

Wan scored a 55 to 45 percent win in the DeKalb portions of the district, which added to his overall 1,876-vote margin. Overall, he received 5,617 votes to Coyle’s 3,741 in Tuesday’s runoff election. In the Nov. 3 general election, Wan topped a field of six candidates – including two other gay men – but his 32 percent of the vote wasn’t enough to avoid a runoff.

On Tuesday, Wan nearly doubled the number of votes he received Nov. 3. Coyle, who placed second in the first round, nearly doubled her 2,050-vote total from last month. Since the November balloting, Wan scored endorsements from gay political groups, former opponents and civic groups that provided a boost to his campaign.

Wan calls Coyle a “fantastic candidate” and says he expected the results to be much closer.

“Yes, I was surprised. But it is reflective of how much work we put into the campaign from the very first day,” he says. “The voters in District 6 are engaged, they know, they are educated, they watch and they appreciated that and saw it was reflective of the kind of council person I am going to be.”

Wan and Coyle fought to replace two-term council member Anne Fauver, a lesbian who decided against seeking a third term.

“We’re just excited about [Tuesday], we’re excited about where we’ve come from. We’re going to stay in the moment and we’ll deal with tomorrow when she shows up,” Bell says.

Bell’s time in the District 58 seat will be short-lived. The General Assembly opens a months-long session in January, and when it ends, Bell will hit the campaign trail to face primaries next summer. Her race Tuesday was a special election to fill the remaining year of former state Rep. Robin Shipp, who resigned in April.

“The community is going to have to rally and support her when she runs for re-election next year,” Graham says. “Adding one more very solidly LGBT district on the map – District 58 – is important to expanding LGBT political strength outside the historical center of Midtown. The community is beginning to expand outside the metro area and eventually throughout the state. But it is going to take some hard work and some time.” 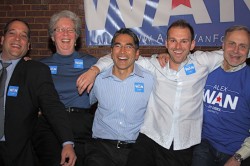 Wan, the development director for Jerusalem House, will return to the office Wednesday. After that, he’ll thanks supporters and work with volunteers to remove yard signs.

“I am going to have to learn to balance both my fulltime job and my role as city council person. I’m proud to be our voice on council,” Wan says.

Bell says she’s looking forward to regaining control of her home, which for months has been filled with campaign workers, covered in paper and had maps of the district tacked to walls. She even has hopes of a few quiet hours Wednesday to watch “Elizabeth,” the Oscar-winning film about the early years of the reign of Elizabeth I and her difficult task of learning what’s necessary to be a monarch.

“My partner and I will get a little more time together and hopefully, sleep,” Bell says.