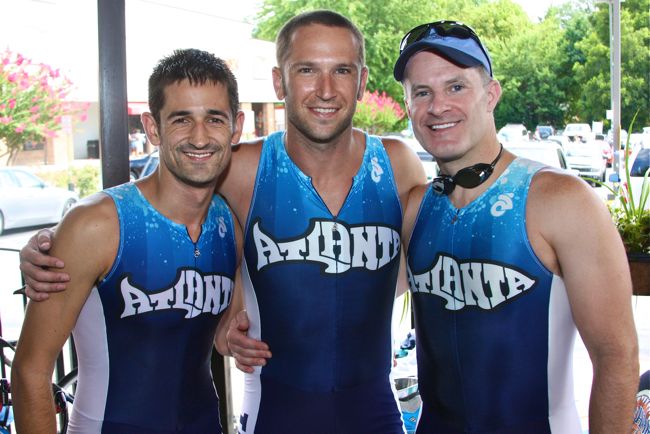 The Atlanta Rainbow Trout spent its Sunday out of the pool and tucked into the comfortable confines of a Midtown eatery to raise funds, spin a little and down a lot of beer. The event at Frogs raised funds for the gay swimming organization’s new triathlon team and two jocks – Alex Solomon and Jeremy Ploessel (top photo, left and middle) -- who are heading to USA Triathlon’s Age Group & Sprint National Championships in Vermont next month. It was part beer bust – we’ve been here with the Trout in the past – and part spin-a-thon. Or at least on Sunday it was a loose translation – Ploessel rode his stationary bike with a beer within reach.

The Trout’s triathlon team started its season strong, opening in April with nine members taking part in a Tri the Park event in Carrollton that included a 600-meter swim, 14.3-mile bike ride and a 5K run. Solomon took third overall in a field that boasted nearly 400 competitors. Ploessel took fourth place in the 30-34 age group and 27th overall. Bernie Colligan (top photo right) placed 20th in his age group and 185th overall. In May, three Trout members completed the Peachtree International Triathlon in Peachtree City. The event was a qualifier for the nationals in Vermont in August. Solomon won the top overall spot, with Ploessel placing 35th overall and 7th in his 30-34 age group. The Trout’s Nick Dietrich placed 15th in the 30-34 age group.

Last month, three Trout members competed in the West Point Lake Triathlon. Solomon won the event, which pushed him to represent the state in the Best of the U.S. Amateur Championships in Alabama in September. Colligan took second place in the sprint distance race. “This race was one of my best overall finishes. I got a personal best on my swim time,” Colligan says in a prepared statement.