Beefcake? There’s not an app for that 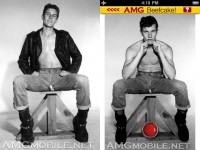 With iPhones attached as permanent appendages to thousands of their gay customers, Apple declined an iPhone app that sends tame beefcake images to those who download it, despite other apps that send half-naked female images.

Apple’s iPhone app store is no stranger to controversy, given its shadowy policies that determine which apps get approved (a free game that lets players choose the “correct” urinal to pee in) and which don’t (Google Voice).

But it’s growing increasingly clear Apple has no strict rules for determining inappropriate content, and an individual Apple reviewer (or however their process works) could determine the fate of an app — which contradicts how other similar apps are treated.

For now (i.e. until Apple rescinds its decision), one thing is clear: Babes in bikinis are okay on the iPhone, while shirtless men — or guys crouched over hiding their bits and pieces — are not.

Shame on you, Apple. Just when our love for you was showing no bounds.