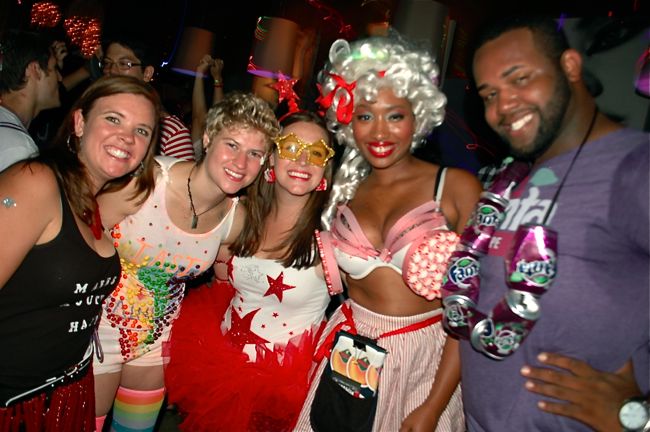 Sugar and spice and everything nice wasn’t just for girls on Saturday, when the monthly Bedlam partiers took on High Fructose Corn Syrup as their July theme to put a hard candy coating on Midtown’s lesbian lounge.

As promised, junk-food inspired costumes turned Bellissima into an “incrEDIBLE” Candyland, with edible attire not just welcomed but preferred by the hosts. Think cupcake bras, cotton candy hair and Skittles-covered onesies. These guys and gals are all-day suckers for a good time.

In case you need a reminder of what the queer co-ed crazies at Bedlam are all about, here is their self-definition, which they take as a mission statement for each of their uniquely themed events:

For more evidence that they take it to heart, check out photos from Bedlam’s WackedOut Blackout party in June, in addition to past parties like a masquerade ball at a mental ward, the Seven Deadly Sins come to life, and fashion from dumpster diving.