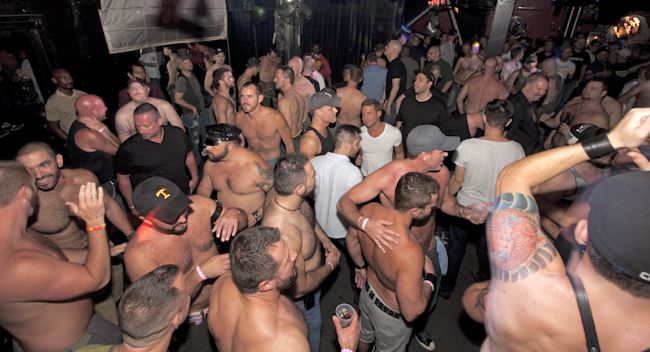 Bearracuda brought its popular night of bear rubs and chunky beats to the Heretic on Saturday, giving Atlanta a taste of the largest-attended bear dance party that has rocked cities including New York, San Francisco, Sydney and Seattle.

Craig Gaibler (second photo) and Medic worked the DJ booth, bringing the talents they display as the resident DJs at Bearracuda San Francisco to Midtown for a night. Gaibler, for his part, enjoyed his swing through the South, offering this take early Sunday on Facebook:

Wow, after an amazing set at Bearracuda with DJ Medic, and a mind-blowing after-hours set by Allison Calagna, this DJ has come to love Atlanta. Dirty South indeed!

But the fun doesn’t stop for the Heretic. DJ Lydia Prim works her magic on Saturday, and the club’s next trip to the beach without leaving Atlanta takes place on July 3. Beach Blast benefits Joining Hearts, similar to their beachfront fundraiser for the non-profit over Memorial Day (view photos), and offers DJ Mike Pope, life guards and a swimsuit contest. DJ Micky Friedmann arrives from Berlin for the evening gig to fuel the party until 3 a.m.