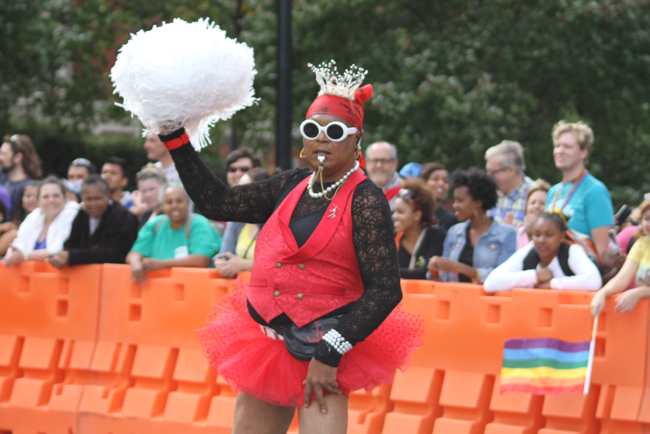 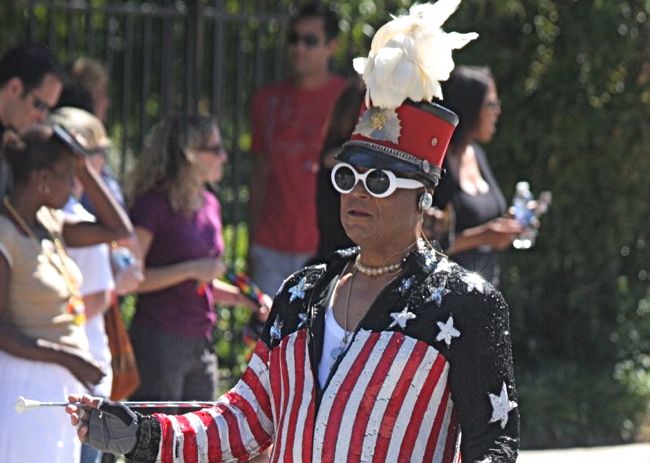 Move over, Paula Deen. Iconic gay Atlanta street performer Baton Bob is in the middle of a meltdown, complete with some racist misogyny and a diss to a woman with cancer. It's not pretty.

It's also left fans of the beloved yet often combative Baton Bob wondering if the Ambassador of Mirth has lost his, well, mirth.

The meltdown came Thursday as Baton Bob continued what he's been calling his Miss Liberty performances in the days since his June 26 arrest outside Colony Square. It started simply enough, with Baton Bob announcing on Facebook about 9 a.m. that he was hitting the streets for the Peachtree Road Race.

But a few hours later, Baton Bob took exception to a fan who interrupted his performance to ask for a photo. For a friend with cancer. And when interrupted during a set, he does not react well and often with profanities. Especially if you accuse him of dangling his dinky in Buckhead.

The fallout was immediate. And harsh. More than 170 comments to his post with fans criticizing the rant and calling on Baton Bob to apologize. He was having none of it.

Criticism continued. His Facebook friends, which according to Baton Bob jumped more than 700 people since his arrest, started dropping. He peaked at Facebook's limit of 5,000 friends before his holiday rant. By Friday morning, the number was 4,846 — a drop of 154 that produced a slow drip of announcements to his Facebook page of supporters who announced they were un-friending him.

Baton Bob was not deterred, started playing the victim and widened his attack.

By early Friday, though, the stream of complaints and criticism apparently sunk in. Baton Bob started walking back his offensive rant from less than a day earlier. He explained in greater detail what happened and complained that photo requests during his performances interrupt his rhythm. The post was also free of the name-calling and profane insults that dotted his message on Thursday. But it lacked an apology, which supporters have demanded.

Yesterday morning when the rain subsided, I decide to go up to Pharr Road and Peachtree to watch the runners in my 'Miss Liberty Costume'. There were lots of runners that saw me,…..and stopped for a photo opt;…..which I obliged.
Then, I made an impromptu decision to do the whole race route,…..all the way down to 10th street. During that process, there were lots of people that wanted me to stop for a photo opt; and I simply stuck my hand out like the Diana Ross,…..Stop In The Name Of Love and said, No Photos Please!!!!!…..The reasoning for that is, while I am on the street performing;…..to stop and pose for a photo opt breaks my rhythm. I realized that I had a long trek ahead of me, and the only way for me to make to 10th Street; I knew I had to keep moving!!!!!……There many other opportunities for you to have photo opts with me, other than during time that; I am on the street performing.

However, there was an incident where some runner wanting a photo opt;…..and I said NO and apparently, that was not what she wanted to hear and proceeded to call one of her girl friends and complain about. Later on, I ended up at Zocalos Mexican Restaurant and the young woman that this woman called was there.

On her way out of the restaurant, she came over my table and blasted me about her disappointment o
f her friend not getting her photo opt??????

Nonetheless,…..I know I try to accommodate everyone; that request a photo opt; depending on the circumstances.

His fans, though, are now the ones not having it.

I can't believe I got caught up in this drAma but I did . I saw this and I can't overlook this . As I over look so much . But I must say . As a a gay person . This is deplorable . You never bypass or over look a person ,white . Lesbian , gay ,cancer , whatever you treat people as you wish to be treated . .and some one who is a nobody and gay to treat someone this way is deplorable .. Ashamed . I'm ashamed that you put yourself out there as a gay person . That's so low and deplorable . You are a shame on gay people . That's what we are supposed to be raising up from …..just saying . . And your a cheap ass bitch too ..