Baton Bob to security: ‘I’ll fuck you up’ 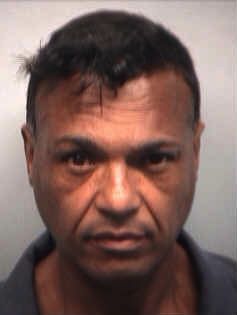 But video taken before his arrest at the intersection of 14th & Peachtree streets appears to contradict some of the allegations a police officer includes in a report released after Baton Bob's arrest.

The security officers told Officer H.J. Davis that Baton Bob frequently performs at the retail and office complex and "causes a disturbance daily," according to an incident report from the Atlanta Police Department (see below). When they asked Baton Bob to leave, he apparently responded with a string of profanities.

When Davis, working off-duty for Midtown Blue, arrived, he spotted Baton Bob "blowing a whistle and dancing on the corner" near the intersection of 14th and Peachtree streets.

"While the suspect was blowing his whistle on the corner, I observed numerous vehicles stopping in the middle of the roadway causing traffic. The suspect was dancing and gyrating in a sexual manner on the city sidewalk blocking pedestrian traffic."

But the video above, shot minutes before he was arrested, shows that Baton Bob's performance was not impacting passing traffic. And it took place on an expansive sidewalk with few pedestrians nearby. Photos of Baton Bob being arrested show few people nearby.

Then, according to his report, Davis approached Baton Bob.

"After speaking to both victims, who stated they wanted to press charges, I approached the suspect. I told the suspect that he needed to come with me because I needed to ask him questions concerning the incident. The suspect stated, 'fuck you, what's this about."

And the confrontation got physical.

Then an attempted shot to the junk.

Baton Bob was arrested today near Peachtree and 14th in Midtown. Looking into it, but here's a photo from the scene. pic.twitter.com/D3VE2NA1QK — Max Blau (@MaxBlau) June 26, 2013

But in the back of a police cruiser, Baton Bob apparently softened his tone.

"While the suspect was being transported, and away from all of the attention at the intersection, he apologized and had a different demeanor. He stated that his aggression towards me was because of how he felt the security guards treated him. The suspect continued to apologize and stated he was thankful with how respectful I was. I advised the suspect that there were no harm and I just wanted to hear his side of the story. When the suspect arrived at the precinct he was even more cooperative and continued to apologize."

Baton Bob's pre-jail post to Facebook on Wednesday confirmed his change of heart about the arresting officer.

"First of all, the atl police officer that responded to the incident thru security has been very respectful and gracious to me even in handcuffs. So, the situation escalated from a complaint from a security officer in the area and for some reason she rolled up on me like she didn't know who I was and like I had not been there before. For them to call police to come to intervene was not necessary. So, out of it, because of my fury, the Atlanta police officer did not understand the elements of the situation, so he was trying to do his job, respectfully and arrested my ass!!!!!!!!! I'll be out tomorrow so look out for my show at 14th and Peachtree. So now I'm waiting to be transported so I can sign my own bond and get the hell out of here. I want to verify, that the Atlanta police was respectful to me considering the circumstances. See you when I see you!!!!!!!!!!!!!!

He's not always so complementary of Atlanta police.

Midtown Alliance offered up an explanation to the incident to Creative Loafing.

"On a personal note, this is a very unfortunate incident," Mock says. "Mr. Jamerson has added to the unique character of Midtown for many years and has appeared at the Midtown Alliance Annual Meeting earlier this year."