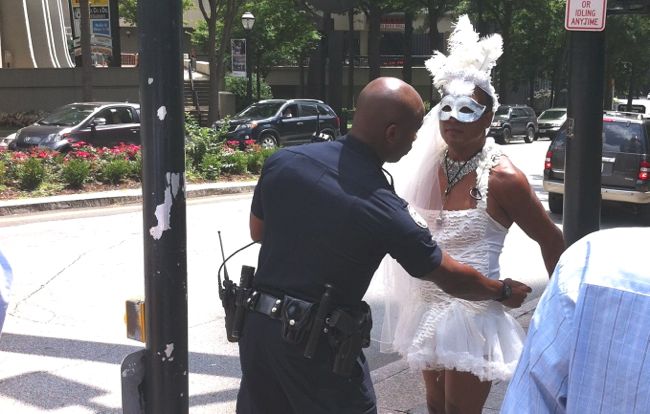 Baton Bob is free to whistle and twirl along the streets of Midtown again after a night in jail and posting bond following his Wednesday scuffle with Atlanta police. Now, he's speaking out about the arrest.

Baton Bob, the 61-year-old gay man and popular street performer whose legal name is Bob Jamerson, was released from the Fulton County Jail on Thursday after posting $4,000 bond. That came a day after being charged with two misdemeanors following an altercation with two security guards at Colony Square. During an early afternoon appearance on Wednesday, they asked Baton Bob to leave. He did but not before letting loose with a string of profanities and threatening them with, "I'll fuck you up," according to an incident report from Atlanta police.

The security guards alerted the private security force Midtown Blue. And when an off-duty Atlanta police officer caught up with Baton Bob outside Colony Square at the intersection of 14th and Peachtree streets, he was again performing in a skimpy white wedding tutu. He was, after all, celebrating the Supreme Court's decision earlier that day to dump DOMA.

A scuffle ensued, Atlanta police said, and the officer eventually arrested Baton Bob, who kept the profanities coming. Colony Square said he's banned from the retail and office complex. But details of the officer's report -- that his performance was stalling traffic and blocking pedestrians -- are contradicted by video and photos before and during the arrest.

After Baton Bob had a few minutes to reflect on the arrest, and before he was booked into jail, he posted a brief statement to Facebook.

"First of all, the atl police officer that responded to the incident thru security has been very respectful and gracious to me even in handcuffs. So, the situation escalated from a complaint from a security officer in the area and for some reason she rolled up on me like she didn't know who I was and like I had not been there before. For them to call police to come to intervene was not necessary. So, out of it, because of my fury, the Atlanta police officer did not understand the elements of the situation, so he was trying to do his job, respectfully and arrested my ass!!!!!!!!! I'll be out tomorrow so look out for my show at 14th and Peachtree. So now I'm waiting to be transported so I can sign my own bond and get the hell out of here. I want to verify, that the Atlanta police was respectful to me considering the circumstances. See you when I see you!!!!!!!!!!!!!!

Since his release Thursday evening, Baton Bob has gone silent on social media despite an outpouring of support and offers of pro bono legal help. We attempted to reach him early Friday and will update if we hear back from him.

Baton Bob: 'Those naysayers out there? Fuck them'

UPDATE: Baton Bob insists that he's not breaking any laws and that overzealous security guards and Atlanta police continue targeting him during his street performances. And now, a day after being released from jail, he's over it.

"I am not breaking any law," he told Project Q on Friday. "They are infringing on my civil rights and civil liberties and if they think I will take it, hell to the fucking no. I will fuck you up. I will not play that game."

He said that he's tried without success to talk with Atlanta police commanders in Buckhead, where he was recently stopped by police during a performance. But on Wednesday, security guards from Colony Square aggressively pursued him in an altercation that led to Baton Bob's arrest.

"When I was in my route, the security at Colony Square rolled up behind me before I could get to the street. We had an altercation," Baton Bob said.

The security officers -- he said there were three; an Atlanta police report identified two -- then called Midtown Blue, the private security force of the Midtown Alliance. By the time an off-duty Atlanta police officer arrived, Baton Bob said he was performing on the sidewalk near the intersection of 14th and Peachtree streets.

Prior to arresting Baton Bob, off-duty Atlanta police Officer H.J. Davis said his performance was stalling traffic and impeding pedestrians on the sidewalk. Video and photos from the incident contradict that. And Baton Bob said he never attempted to kick Davis, which the officer also alleges in his incident report.

Baton Bob also said that Davis initially wanted to charge him with terroristic threats, which is a felony. That charge was included in a brief media statement issued by Atlanta police on Wednesday before it was quickly revised to say "precise charges are pending." Baton Bob was later charged with two misdemeanors -- obstruction and simple assault.

"It should have never escalated to that because your cocky ass wanted to show me you were a police officer," Baton Bob said about Davis. "I don't give a shit what those security people told them. It didn't warrant that."

Baton Bob said he faces an appearance in Fulton County State Court sometime in the next four to six months. But before that, he'll be consulting with an attorney about a possible lawsuit against Colony Square and Atlanta police, rallying his supporters and speaking out about the arrest to city officials.

"I am fucking over it. This is not what I am but. Don't bring this shit to me. Those naysayers out there? Fuck them. You are not going to impose on me this way as a fucking city," he said.

The iconic performer also plans to return to the streets on Friday -- outside Colony Square, which has banned him from the property, and in Buckhead.

"When I am out performing, don't roll up on my ass. I am going to turn this lemon into a big old gallon of lemonade. That is my mission," Baton Bob said.