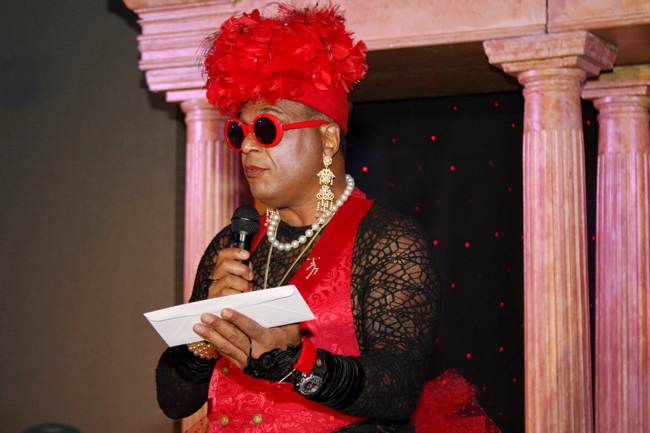 Baton Bob wants you to forget. Forget what? His epic holiday diss of a lesbian and her friend with cancer with some racist misogyny thrown in. He's trying to rewrite history by scrubbing Facebook of this controversial post.

And it seems to be working. After the popular gay street performer unleashed his latest rant on July 4th, his online friends — which had topped out at Facebook's limit of 5,000 — started dropping as supporters took issue with Baton Bob's missive. But a long holiday weekend combined with his efforts to scrub his Facebook page of the initial rant and then two follow-ups seems to be working. On Monday afternoon his Facebook friends were back up to 4,995.

As the controversy flared on Thursday and Friday, Baton Bob sought to cap his week with a happy ending. After all, he was just arrested days earlier. So he headed to Jeju Sauna, a Korean bathhouse in Duluth that gets a little gay frisky.

“I'm getting ready to head out to,…… the 'JESU SAUNA' for detoxification and a great massage!!!!!!”

He followed that up with a Saturday performance in Piedmont Park and some peach cobbler and a trip to the movies on Sunday. Rested, he also got to work early Sunday scrubbing his Facebook page of his rants and much of the criticism aimed at him from fans.

But he did leave in place an explanation he offered on Friday offering some additional details on the incident that led to his offensive rant but fell short of apologizing.

Yesterday morning when the rain subsided, I decide to go up to Pharr Road and Peachtree to watch the runners in my 'Miss Liberty Costume'. There were lots of runners that saw me,…..and stopped for a photo opt;…..which I obliged.

Then, I made an impromptu decision to do the whole race route,…..all the way down to 10th street. During that process, there were lots of people that wanted me to stop for a photo opt; and I simply stuck my hand out like the Diana Ross,…..Stop In The Name Of Love and said, No Photos Please!!!!!…..The reasoning for that is, while I am on the street performing;…..to stop and pose for a photo opt breaks my rhythm. I realized that I had a long trek ahead of me, and the only way for me to make to 10th Street; I knew I had to keep moving!!!!!……There many other opportunities for you to have photo opts with me, other than during time that; I am on the street performing.

However, there was an incident where some runner wanting a photo opt;…..and I said NO and apparently, that was not what she wanted to hear and proceeded to call one of her girl friends and complain about. Later on, I ended up at Zocalos Mexican Restaurant and the young woman that this woman called was there.

On her way out of the restaurant, she came over my table and blasted me about her disappointment o
f her friend not getting her photo opt??????

Nonetheless,…..I know I try to accommodate everyone; that request a photo opt; depending on the circumstances.

And by Monday, Baton Bob was back to taunting security guards. A confrontation with security officers led to his June 26 arrest outside Colony Square.