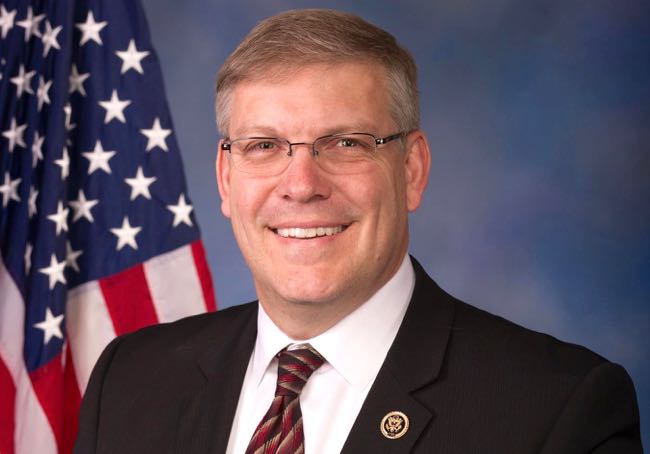 A Georgia Congressman who blamed the shooting at a GOP event on the harsh tone of political debate has a history of using his own heated rhetoric to condemn LGBT people and cozies up to supporters who do the same.

U.S. Rep. Barry Loudermilk, a Republican whose 11th District includes large swaths of metro Atlanta, was standing near home plate on Wednesday when James Hodgkinson opened fire on the group of Republican lawmakers and staffers before being shot by police.

Loudermilk was not among the injured. Since the attack, the second-term lawmaker has blamed heated rhetoric for fueling incidents like the one he survived. Via the AJC:

After having a few hours to digest Wednesday’s shooting, Loudermilk said he felt “a lot of anger.”

“There has to be a coming together in this nation. There’s a lot blame, I believe, and rhetoric out there that’s pitting one side against the other,” he said.

Loudermilk said the two political parties need to work harder to have more civil political debates, rather than ones that can drive “people who are already somewhat unstable to commit violence.”

Loudermilk said he thinks the tone of the public debate over the future of health care in particular is putting lawmakers in danger. He said the shooting is an example of why members of Congress have been declining to hold traditional town halls.

“I've had people back in the district that actually say I'm killing them because I voted to fix a broken health care system,” said Loudermilk, who said many of his fellow lawmakers hear similar messages.

He said it’s becoming increasingly difficult to tell who’s just emotional and who’s “emotionally deranged.” The congressman said both his own security team and local law enforcement have expressed concerns about violence at town halls.

Yet Loudermilk, a former state lawmaker, has a history of heated rhetoric aimed at LGBT people, immigrants, Muslims and others. And when he's not spewing his anger at people not like him, he's glad-handing supporters that do.

In 2015 – when the Air Force veteran still found the strength to hold town halls – he used one to compare the U.S. Supreme Court's legalization of same-sex marriage to slavery and the Dread Scott case. Via Right Wing Watch:

The representative also touched on the Supreme Court’s marriage equality decision, criticizing the justices for allegedly overstepping their constitutional boundaries. He joked that he used the word “decision” loosely, asking attendees, “Do you know what the actual term for what they did was? An opinion.”

“Hey, it was the Supreme Court’s opinion that Dred Scott and slavery was okay, did they get that right?” Loudermilk continued, echoing similar arguments made by anti-gay activists and politicians including Alan Keyes, Steve King, and Bryan Fischer.

“They get things wrong, sometimes their opinion is wrong,” Loudermilk said. After comparing marriage equality to slavery, Loudermilk left the crowd with an optimistic sentiment: “We can overcome these things.”

Loudermilk has also argued that the country needs stronger “religious freedom” bills like the First Amendment Defense Act to prevent the government from bullying people. And by people, he means conservative Christians like him. Loudermilk has also backed fired Atlanta Fire Chief Kelvin Cochran, who was dismissed over his anti-gay, misogynist and anti-Semitic book.

Sometimes, Loudermilk lets others do the hate-mongering for him. The Family Research Council – classified as an anti-gay hate group by the Southern Poverty Law Center – endorsed Loudermilk in 2013. The SPLC sums up FRC like this:

The Family Research Council (FRC) bills itself as “the leading voice for the family in our nation’s halls of power,” but its real specialty is defaming gays and lesbians. The FRC often makes false claims about the LGBT community based on discredited research and junk science. The intention is to denigrate LGBT people in its battles against same-sex marriage, hate crimes laws, anti-bullying programs and the repeal of the military’s “Don’t Ask, Don’t Tell” policy.

Here's a rundown of FRC's rhetoric against LGBT people.

Sadly, FRC's support of Loudermilk isn't the worst. For that turn to David Barton, the conservative debunked historian who also backed Loudermilk's Congressional run. Loudermilk said this of Barton: “There is no greater expert on the U.S. Constitution and the underpinnings of American government, than David Barton.”

And Barton has said God condemns homosexuality through AIDS. Via HuffPost:

“And the Bible again, it’s right every time, and studies keep proving that and that’s why AIDS has been something they haven’t discovered a cure for or a vaccine for,” Barton said on an episode of WallBuilders Live. “Every time they just about get a vaccine discovered for it, it transmutes into something new and they have to start over again. And that goes to what God says, ‘Hey you’re going to bear in your body the consequences of this homosexual behavior.’”

So when Loudermilk blames political rhetoric for the tragedy this week, he ought to reexamine his own words – and those of his supporters – before casting blame on others.