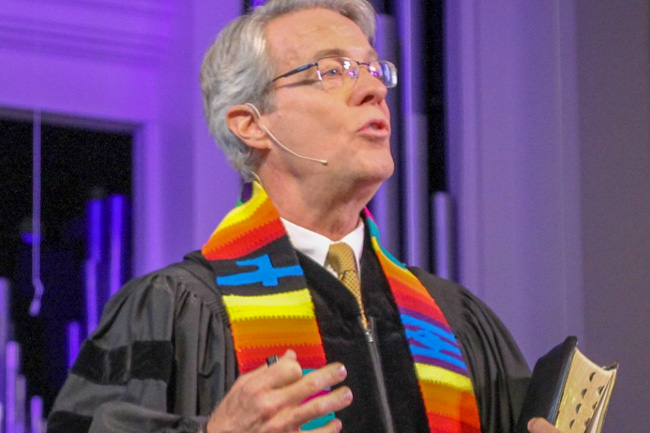 The Atlanta Metro Baptist Association ended its 110-year relationship with the First Baptist Church of Decatur over the church’s decision to perform same-sex marriages and appoint LGBTQ members to leadership positions.

AMBA notified the church about its removal in a certified letter in January, according to First Baptist Senior Pastor David Jordan. But the group’s concerns with the church’s progressive views likely go back to it hiring a female senior pastor — Julie Pennington-Russell — in 2007, according to Jordan (photo).

“So they already were concerned about, in their mind, our sanity,” he told Project Q Atlanta. “How could a Baptist church have a woman as a pastor? Already we were on their radar screen as being heretical.”

The church ordained its first openly gay deacon in 2015.

“When Theron [Clark-Stuart] was ordained as a deacon, they heard about it and that just added fuel to the fire,” Jordan said. “So this has been percolating for a while.”

Jordan replaced Pennington-Russell as senior pastor in 2018. But he was aware of her work during his time as a pastor at a Charlotte, N.C., church.

“I knew about what [First Baptist Church of Decatur] was doing at that point and was proud of them and happy for them,” he said.

AMBA is a network of congregations that “plant churches, renew churches and engage communities for the gospel of Jesus Christ,” according to its website. The group hired Jimmy Baughcum as its executive director in January 2019.

AMBA updated its bylaws in May to forbid member churches from performing same-sex marriages or appointing LGBTQ members to leadership positions, according to Jordan.

Jordan said Baughcum and another AMBA leader met with him in November to convince the church to conform with the group’s bylaws regarding LGBTQ issues.

“They asked what I thought about that and I said I’ve conducted a number of same-sex weddings and we welcome and rejoice for them, and that pretty much sealed the deal,” Jordan said. “They said we could go quietly into the night or they would vote us out. I said, ‘This is your deal, not my deal.’”

Baughcum declined to answer Project Q’s questions about the group’s LGBTQ views and its reasons for removing First Baptist Church of Decatur.

“This is an association and church matter and I have committed to speak about it only with those within the church and faith community,” he said.

Baughcum claimed in the separation letter that the church was removed for “affirming, approving or endorsing practices or behaviors that do not align with the biblical standards” outlined in the group’s updated bylaws, according to Decaturish.

Baughcum also claimed that the church hadn’t sent a representative to AMBA’s meetings in two years. Jordan said that’s an excuse to cover up the group’s anti-LGBTQ views.

“That’s ridiculous,” he told Project Q. “If anyone had cared about that as an issue, they would have contacted us and asked us if we still wanted to be part of the association. It’s a total bogus argument.”

Clark-Stuart told Decaturish that AMBA’s decision is “not very Christ-like.”

“It’s a fairly evangelical group, and the evangelical movement is shrinking rapidly,” he said. “The southern Baptists are shrinking because of their inability to love people who are not just like them.”

First Baptist Church of Decatur ordained a transgender deacon in 2017. Both she and Clark-Stuart have finished their three-year terms as deacons, according to Jordan.

The church received its nonprofit status through AMBA but will obtain it through a new group, according to Jordan.

Elizabeth Wilson, Decatur’s first African-American mayor, will be a guest speaker at the church’s services on Sunday. The appearance was scheduled before AMBA cut ties with the church, but Jordan said Wilson’s visit is timely.

“With folks like Elizabeth, she’s another one where she has a lot of scars with things that happened and she can sit here with a smile and tell those stories that are difficult and she’s lived through it,” he said.

Jordan discussed AMBA’s separation from the church in his Feb. 8 service, which you can listen to below.