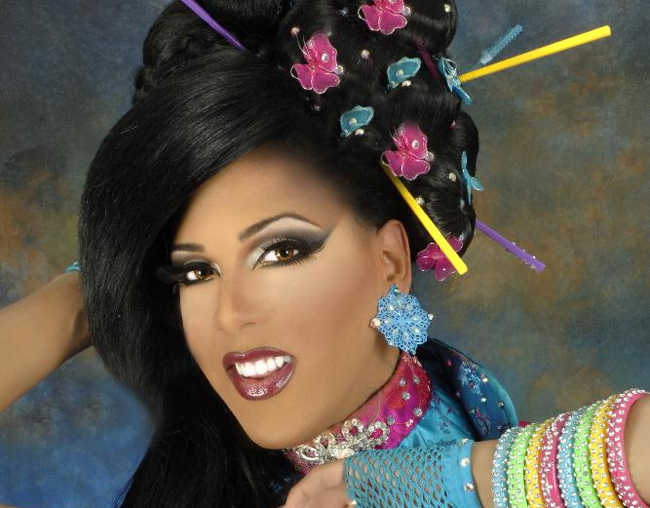 “RuPaul’s Drag Race 3’s” Alexis Mateo tells us in her own catch phrase that the jig is up: Atlanta is ground zero for touring “Drag Race” alums. She tells us why before her visit on Friday.

As a Top 3 finalist, Mateo is known as much for making Season 3 fun and pageant-ready as for her tear-jerking story of lost love to a closeted military man. She (photo) says she’s learned a lot since the show, and she brings it all to the Club Rush stage on Friday as the headliner for Got Leche’s weekly gay Latin night and this week’s special Vestida Party.

But before all that loveable energy gets the cheers and the dollar bills flying, we got a heaping helping of Mateo’s infectious personality to warm you up for the event. The Latin beauty opens up about competing with grace, breaking the rules, lessons learned, why Atlanta rocks for drag queens, and not one but two new loves replacing the jarhead who broke her heart on “RuPaul’s Drag Race.”

What is your favorite memory from “Drag Race”?
Oh my god! I still remember the moment when I finally saw RuPaull in person in front of me. It is my favorite moment cause I realized that everything was real and that I was on “Drag Race.” Since then, my life has changed so much. I had the opportunity to travel around the U.S. and get to know so many amazing people that I have been really happy for the opportunity.

You were a fierce competitor but remained likeable throughout the competition. What’s your secret?
I didn’t stay out of drama; I just know how to deal with it. Some times you have to evaluate the problem and ask your self “Does this situation need my attention?” You can be part of a problem, but it’s how you carry yourself that shows the people who you really are!

A lot of your story on the show was about your estranged military boyfriend. What happened since then, and how did you grow from the experience?
That was a part of my life that showed me to love myself before anything in my life ‘cause I’m the most important person in my life. Since then, I met a wonderful guy name Jeffrey who I share my life with now, and we have a toy Pomeranian Puppy named BAMbi. I really think it’s a family and it feels like home when I’m with them. Before, I used to be wondering why I was single but didn’t realized that the time was to work on me, and I learned to love myself in order to get to love that special one.

What can Atlanta expect when you hit Club Rush this weekend?
I’m so exited to be in Atlanta. Finally! Because I came from the pageant background, Atlanta girls have been like a school to me. They know drag, and that’s what I love the most. This weekend I’m bringing you all Alexis Mateo – fun, energetic, friendly and with a smile on my face that says “Thank You” for allowing me to be part of the Atlanta stage!

Anything more to share with your Atlanta fans before you arrive?
So exited to see Atlanta before “RuPaul’s Drag Race: All Stars” on Oct. 22 on Logo. It’s gonna be a crazy, out of this world season, and you guys will love it. Thank you all so much for always being part of this New Generation of Drag, breaking all the rules for a new future. Oh, and BAM!

Got Leche’s Vestida Party with Alexis Mateo goes down at Club Rush on Sept. 7, 10 p.m. to 5 a.m. It’s just one of the best gay things to do in Atlanta this weekend.