Ballet high-kicks us back to ‘Moulin Rouge’

It’s as if the Atlanta Ballet is intent on drawing the gays to its 81st season kickoff. What’s not to love about dance and romance set against the vibrancy of 19th Century bohemian Paris and the legendary Moulin Rouge cabaret?

“People are really going to be swept away by the story,” says gay performer Brian Wallenberg, who dances the part of famed painter Henri Toulouse-Lautrec in the production of “Moulin Rouge: The Ballet,” which opens Friday at the Cobb Energy Centre.

“Everyone can relate to love and the joys and challenges that go with that,” Wallenberg says. “Some gay members of the audience might particularly enjoy the look of the inside of the Moulin Rouge. The costumes and sets are vibrant, lush and rich inside the club, which contrasts with the outside scenes in an exciting way.” 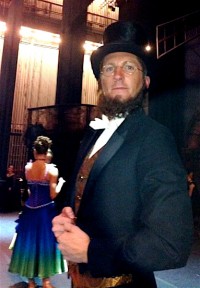 But first things first. The ballet is taken from real stories of the legendarily excessive venue. It’s not based on the movie starring Nicole Kidman and Ewan McGregor. Wallenberg (second photo, in costume rehearsal) plays a version of the real Toulouse, not a dancing rehash of the cropped-at-the-knees John Leguizamo from the movie.

“And it has nothing to do with the Christina Aguilera song either,” Wallenberg laughs.

Like the movie, though, the ballet by Jorden Morris is a sad, ill-fated love story. Natalie is a launderette in the cabaret plucked from obscurity by Zidler—again, not the caricature from the movie—for her beauty and star quality. Matthew is the wide-eyed artist new to town who falls head over heels for her.

“Toulouse was a very accomplished artist, one of the most celebrated of the time,” Wallenberg says. “He did a lot of the poster work for each new show at the Moulin Rouge. My character takes on the leading man Matthew as an apprentice and shows him this world inside the Moulin Rouge, so he gets to see a part of Paris that he wouldn’t be able to see without Toulouse.”

And about the other thing you’re thinking: this is not your granny’s ballet. Look for high-kicking Cancan choreography that hearkens the adventure and indulgent atmosphere of the singular time and place that was the Moulin Rouge.

“Come in with an open mind and get ready to have fun,” Wallenberg says. “People who think they don’t like ballet will see all kinds of performance and spectacle, and people who’ve never seen a ballet before will be surprised by how much they enjoy this production.”

And Wallenberg has another message for gay audiences.

“I feel like the gay community can and should support the arts, especially now, and stand behind such a vibrant arts scene we have in Atlanta,” he says. “I hope they can come to this show and have a great evening and escape for a couple of hours. We all need an escape from what’s going on in our lives once in a while.”