Waites, a former state lawmaker, and queer community organizer Bakhtiari both led their fields with margins just shy of winning outright on Election Day in November, Both dominated their runoffs. Waites beat Jacki Labat for the At-Large Position 3 seat with 53% of the citywide vote. Bakhtiari won the District 5 seat with a whopping 68% of votes against Mandy Mahoney.

The two join councilmember-elect Alex Wan, who with nearly 80% of the vote on Election Day won back the same District 6 seat he vacated in 2017. He became the council’s first Asian American and first out gay male member in 2010.

The three newly elected members make up the most openly LGBTQ councilmembers to ever serve on Atlanta City Council at the same time. Lesbian members Cathy Woolard and Anne Favre served together in the early 2000s.

Neither new candidate made a direct public statement declaring victory, though Waites tweeted a meme that says “To God Goes the Glory” late on Tuesday. 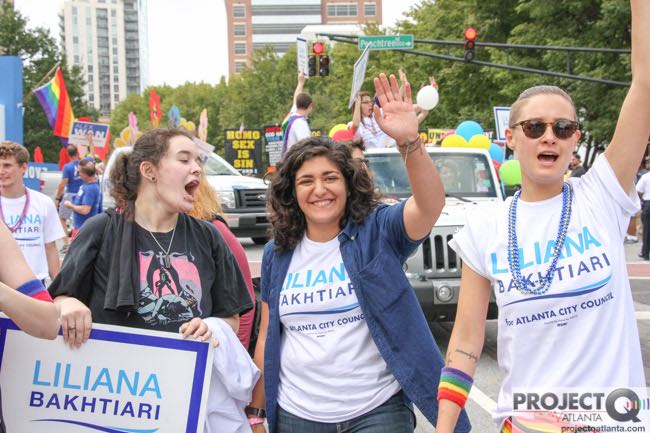 Even more history made

Bakhtiari becomes the first openly LGBTQ Muslim elected official in Georgia history. She is one of just five out queer Muslims ever elected to public office in the U.S. She relished the opportunity to represent Atlanta’s diversity on the council.

Her election brings a win after years of commitments and razor-thin “almosts.” On Election Day last month, she was just shy of a District 5 win without a runoff. She crossed the 50% threshold in the five-person race by just 20 votes, then late-breaking counts dropped her margin to 49.5% to Mahoney’s 18.3%, forcing the runoff. In 2017, she was only 250 votes short in her city council bid.

Waites is no stranger to making history, either. She is the first Black lesbian on the council, and in 2012 she became the second Black LGBTQ woman elected to the Georgia state legislature.

“We need to start electing people that bring a level of competency and compassion to the conversation,” she told Project Q in August. “I understand how to move policy through all levels of government.”

“I think [becoming mayor] will just send this signal about how progressive South Fulton actually is and what our priorities really are,” Kamau told Project Q in August.

As a South Fulton councilmember, Kamau helped amend a nondiscrimination resolution to include sexual orientation and gender identity.

On Wednesday, he tweeted a celebratory though vague nod to his win with a video clip of “Everybody Rejoice” from The Wiz.