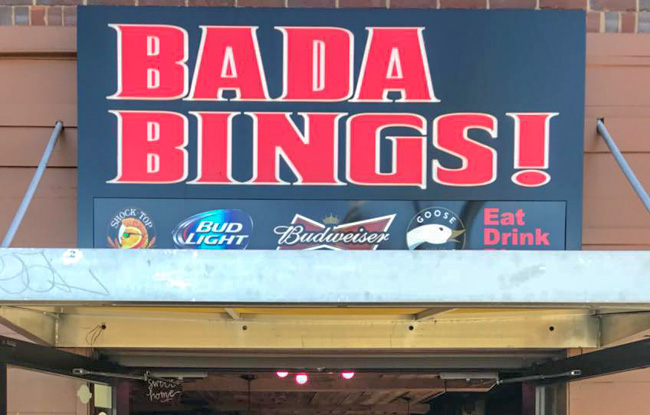 Atlanta restaurant Bada Bings targeted a Republican state lawmaker it has political differences with by questioning his sexuality and calling him gay in social media posts.

When challenged on the homophobic tweets, the restaurant then deleted the posts and claimed it was attempting to “glorify Gay Pride week” in Atlanta.

The bizarre incident unfolded Monday when Bada Bings tweeted a picture of state Rep Scot Turner and another man. The restaurant, located on Decatur Street in Sweet Auburn, tagged Turner with the caption “@Scot23 celebrating #GayPride.”

Turner, a Republican from Holly Springs, posted a screenshot of the tweet on Facebook. Turner said the restaurant has been trolling him for his criticism of House Speaker David Ralston. Bada Bings is “one of [Ralston’s] fiercest online defenders,” according to the AJC.

Turner said the man in the photo is a conservative analyst who helped him pass a student loan debt bill this year. Turner’s tweet also included a screenshot of his Twitter conversation with the restaurant. Turner said he’s eaten at Bada Bings and called the tweets an embarrassment to the restaurant's employees.

“How so by posting a pic of a gay couple, if you aren’t just say so, it’s just what I heard, I thought it was cool for somebody from the State Cap to represent the #LGBTQ community if that’s being embarrassing shame on you if a mistake my bad,” Bada Bings responded.

Turner took to Twitter to criticize the restaurant for “[thinking] calling someone gay is an insult.” Bada Bings responded by calling Turner gay again.

Very much the opposite I thought it was a beautiful pic that showed the support from a gay State Representative for the #LGBTQ community if you’re offended I’m sorry it’s just what I heard. Sorry you found it insulting .

The restaurant also said they were “[glorifying] #GayPride week” in Atlanta after Turner criticized them again.

Nice try Scotty but it was a simple pic to glorify #GayPride week here in #Atlanta sorry you are offended . The pic has been deleted didn’t realize you were so homophobic. Happy 4th! pic.twitter.com/D4FiQRVqhg

If Bada Bings truly wants to celebrate Pride with LGBTQ state lawmakers, here are five they can pick from.

Bada Bings later deleted the original tweet and the subsequent ones captured in Turner’s screenshots. It then tweeted positive references to Pride Month with rainbow flag emojis, even though Stonewall Month ended on Sunday. A review of Bada Bings’ Twitter and Facebook accounts reveal no mentions of Pride Month or LGBTQ issues in June.

Ralston, a Republican from Blue Ridge, has been under fire since February when the AJC discovered that he’s frequently taken advantage of a law that allows attorneys to delay court cases if they serve in the General Assembly. Turner was one of the lawmakers who called on Ralston to resign as House speaker.

Ralston has stymied attempts to pass anti-LGBTQ “religious freedom” legislation in the House in recent years after lawmakers passed a sweeping anti-gay bill in 2016.

We reached out to Bada Bings and will update the story if the restaurant responds.