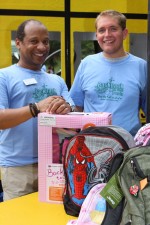 You’ll have to excuse For the Kid in All of Us for taking a few weeks to tally all of the stuff they raised at the 4th Annual Backpack in the Park on June 30.

But they finished counting, stuffing and delivering and announced Tuesday that the event helped fill 1,600 backpacks. The packs and the school supplies inside them are distributed to children in need as they prepare for the start of the school year. In short, Backpack in the Park exceeded its goal of 1,200 backpacks with an event taking place in the middle of a recession.

In an email to supporters on Tuesday, For the Kid President Frank Bragg calls the event “a tremendous success.”

Processing such an outpouring of love and support from our friends, Patrons and Sponsors has taken longer than we anticipated. In a time when many nonprofits are struggling to maintain the status quo, we far surpassed our 2008 numbers and our goal for the year. Sometimes, thank you just doesn’t seem adequate enough, but on behalf of our Officers, Board of Directors and Beneficiaries, know that we are grateful!

The organization now turns its attention to its Patron Party on Aug. 27 and the Toy Party & Silent Auction in December.

View the Project Q Atlanta photo album from Backpack in the Park.