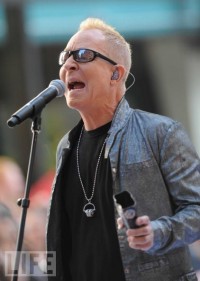 Two bingo games for PALS in one month? Yup. Besides the monthly second-Wednesday bingo, B52s singer and gay gadfly Fred Schneider hosts a special fundraising game and dance this Friday.

Schneider (photo), the booming male voice of the quintessential party band, is also a DJ–of sorts. In other words, he lends his name and his signature brand of crazy to draw a crowd to his hand-picked events, including Friday’s “Spring Thang Bingo Dance Party.” Say what you will, it works.

He tells the AJC:

“I’m going to be playing all this wild and real obscure funk. I don’t take requests. I’ll probably get out on the floor dancing. I don’t really know how to DJ. I just pick the songs and then get out and dance.”

The event will also feature prizes for the game, as well as food, drink and swag for sale. Buy your tickets now. A $40 entry fee includes seven bingo boards, and of course benefits Pets Are Loving Support and the Georgia Music Hall of Fame, which inducted the Athens-born B52s in 2000. You can also pay $20 just to party and forego the bingo, or $75 for the VIP treatment.

Speaking of gay men-about-town, our favorite gay Atlanta magazine columnist Rich Eldredge also talked to Fred about what’s up lately, including Friday’s event. He told both publications the same thing: Who cares what you wear as long as you “just bring your wallet.” To be perfectly accurate, in the AJC, he said “just bring your big, fat wallet.”

Eldredge, with a long history of up-close-and-personal celeb stalking, warns us to lock up the liquor when Fred’s around. That’s his way of confirming what Fred himself promises.

“You know me, when I’m in Atlanta, things get crazy!” says Schneider laughing. “I just hope y’all are ready. It’s going to be a crazy bingo night with me spinning music I love.”