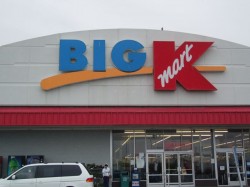 Cruising in retail stores is nothing new for the gay boys — hello, did you ever shop at the former Homo Depot on Lindbergh Drive? The new spot seems to be a Kmart in Buford.

Two men were busted on Tuesday for allegedly pulling a Bill Clinton in the potty. How’d they get caught? They apparently hadn’t heard that Gwinnett County cops arrested three men during a sting last month at the same store located in the 1600 block of Buford Highway. So they went about their wide-stance, under-the-stall action.

The copulation went south for Robert Evola and Jose Zelidon when their moaning – yes, moaning – alerted a security officer at the store, who pursued the noise and allegedly discovered the two engaged in oral sex.

Police reported that a store manager entered the bathroom of the Buford Highway store and heard moaning.

“The moaning stopped then started back up again,” said Officer Brian Kelly. “He (the manager) then observed an individual crawl underneath one of the stall partitions with his pants down around his ankles.”

Both men denied knowing one another or pulling a Larry Craig. Here’s the kicker: Zelidon allegedly had gloves, condoms and lotion in his front right pocket. That’s quite the party pack for shopping in a low-end retail outlet.

True to their nature, local TV news crews jumped on the incident. Fox 5 was pretty tame, but CBS – typical of their tabloid approach – wondered whether “Buford Kmart Male Sex Hotspot?” Worse yet, the TV report went on to question police officials, asking if they believe a “sex ring” is operating out of the store.

CBS Reporter Renee Starzyk asked police if they believe a sex ring is operating out of the store.

“Certainly our investigators will be following up on this matter,” said Kelly. “They’ll be checking into the fact that this has happened twice in the same location to determine if there’s any connection.”