Attacker says sorry, but adds ‘I barely hit him’ 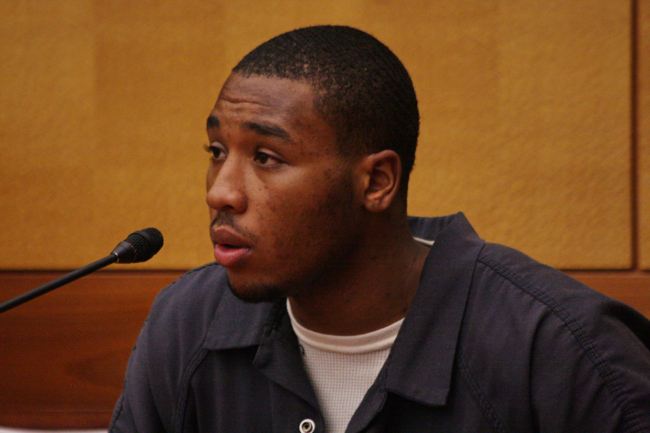 READ MORE | ‘Ultimate bullies’ get 5 years for ant-gay beating READ MORE | State reps duel for attention in gay beating case One of the three men facing up to 75 years in prison for beating an Atlanta gay man apologized to the victim and Atlanta’s LGBT community during a sometimes-contentious court hearing Thursday that included gay activists asking for leniency for the attackers. Futon County prosecutors are seeking 15-year prison sentences for Christopher Cain, Dorian Moragne and Dareal Demare Williams in the Feb. 4 beating of Brandon White. Assistant District Attorney Gabe Banks wants Moragne to serve 10 of those 15 years in prison with the remainder on probation, with eight years each for Cain and Williams. Moragne (top photo) and Williams pleaded guilty in May to four felonies in the Feb. 4 beating of Brandon White; Cain pleaded guilty on Thursday before a sentencing hearing that stretched for hours and is expected to conclude on Friday. Jarvaris Bradford, who is accused of yelling anti-gay slurs while recording the attack with his smartphone and posting it online, has been charged in the case but remains on the lam. White sat through a portion of the hearing and delivered chilling testimony about what took place. “Once I am hit, my mind goes away,” White said during his testimony on Thursday. “I am trying to process what is happening, what is going on. It is an outer body experience. When you feel the pain that Is coming, you’re like I am hoping I am going to make it out of here.” Banks then asked White if he feared for his life during the attack outside a grocery store in southwest Atlanta. “You hear about things like this and most of the cases it’s fatal. If I don’t make it, I’m thinking what is my mom going to do, what are my nieces going to do? All of this is running through my mind and I am trying to figure out why,” White said. White also swatted down suggestions from some LGBT activists; Kenya Herring, Cain’s attorney; and Jay Abt, Moragne’s attorney, that he knew the attackers and said something to the men that prompted the attack. “When I first did a press conference, I was asked the question if I knew these guys. When I did my interviews with the police and FBI that was their first question. I don’t know these guys. I’ve never seen these guys. I’ve never had any altercation with these guys,” White said.

Even after his injuries from the attack healed, White (second photo) said he still lives with the impact of the beating and undergoes therapy twice a month. 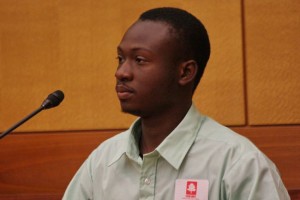 “It was embarrassing and humiliating. You have one person against three people, a person that can’t even defend themselves that can’t even get a fair fight,” he said. “There is a constant look over my shoulder to make sure no one is coming behind me. I have never done that before. I never had a reason to.” Moragne, the only attacker who testified during the six-hour hearing on Thursday, apologized to White, Atlanta’s LGBT community, the court and his family. “Frist and foremost I would like to start off with an apology from deep down,” he said. “This attack did not only affect [White] but was also taken as an attack on the gay community.” Moragne said he could change if given another chance. “I truly believe that I can become a productive member of society. I am actively pursuing change in my life,” he said. “We made a mistake. I don’t hate nobody. I’ve got gay family.” But Banks challenged Moragne on the sincerity of his apology and his refusal to admit that he’s a gang member. Moragne nearly derailed his plea agreement during a hearing in May when he balked at admitting to a felony count of solicitation of gang activity. “I didn’t want to plead guilty to the gang member because I am not a gang member. I plead guilty because I didn’t want to take it to trial. I am not in no gang. I am not a Blood or Crip. I am from Florida,” Moragne said Thursday. “This ain’t what y’all portraying it to be. This ain’t California. We don’t have a history of beating up gay people. All of this stuff you are putting on the media to say we beat gay people so you can pass a law,” he added.

'I didn’t hit him to the point of killing him'

Moragne also suggested in an exchange with Banks that White said something to Cain and that prompted the attack. Cain was the first to hit White after his attackers waited for him outside the grocery store. “Did Brandon say something to Cain,” Banks asked. “From what everyone was saying, he did say something,” Moragne said. “I was being stupid, I was being a follower. I was wrong for what I did.” Moragne continued by attempting to undercut the seriousness of the attack: “I barely hit him. I was wrong for hitting him but I didn’t hit him to the point of killing him. I was just being young and dumb.” Banks retorted by asking Moragne if he threw a tire on White. “Next question please,” Moragne retorted. “Did you throw a tire on him?” “Yes.”

All three men – Cain, Moragne and Williams – had criminal records prior to attacking White, are suspected gang members and two have run afoul of the conditions of their probation. But several LGBT activists – including state Rep. Simone Bell – signed a letter urging Superior Court Judge T. Jackson Bedford to sentence the men only to probation. “With great respect to the Court, we must reiterate that we believe the homophobia underlying physical attacks on LGBTQ individuals is not remedied through imprisonment,” the letter states. “We are supportive of Mr. Moragne and Mr. Wiliam [sic] being permitted to regain their freedom by imposing sentences that will hold each young man to account for his actions through probation or community service.” Testimony is scheduled to continue on Friday before Bedford sentences Cain, Moragne and Williams.