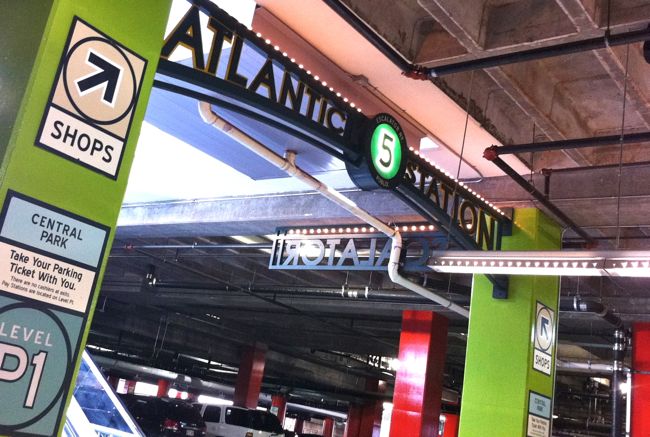 Atlantic Station says it’s cooperating with the police investigation into a gay bashing on Saturday that left the victim with a gash on his head but refutes allegations that security for the retail center was reluctant to take action. In a statement released late Sunday, an Atlantic Station spokesperson -- Elizabeth Hagin of Wilbert News Strategies -- said witnesses provided conflicting accounts of the incident, which took place on Saturday evening. “The safety of all guests at Atlantic Station is our top priority,” Hagin said in an email statement on Sunday. “Witnesses have given both Atlantic Station Public Safety officers and APD officers conflicting information regarding this incident. We are currently cooperating in the investigation.” But when pressed on Monday about allegations that the Atlantic Station security guard first attempted to eject the victim and a friend from the event, was hesitant to take action and blocked his face from being photographed, Hagin issued a second statement disputing those allegations even though an investigation into the incident is not yet complete. “We are committed to serving the diverse Midtown neighborhood, including the LGBT community, a commitment that has been demonstrated by our partnership with events such as the Atlanta Gay Men’s Chorus Big Wig Party and the Fenuxe Magazine Best of Atlanta Fire Party and the diversity in our own management team,” Hagin said. “In the case of Saturday's incident, witnesses have given both Atlantic Station Public Safety officers and APD officers conflicting information. We are cooperating in the investigation and will share information as it becomes available. Our own public safety officers handled the incident according to protocol and were respectful to all parties involved. The safety of all guests at Atlantic Station is our top priority,” she added. The victim was punched in the head and knocked to the ground after a man asked him, “Are you a fag?” The assailant, who was apparently accompanied by a female, fled on foot. The victim made his way to the event he planned on attending, the Fenuxe Fire Party, which was being held at the former Fox Sports Grill on 19th Street. There he met friend Paul Swicord, who detailed the incident to media outlets on Sunday. “At first, [the security guard] informed asked us to leave the property because of an incident. I was lucky enough to catch the attention of the facility manager and asked him, why we were being thrown out? He quickly jumped in and instructed the security guard that we need to file a report,” Swicord said. The security officer recorded basic details of the incident but said it could take up to six weeks before a report would be available. When Swicord attempted to take a photo of the officer, he held up his hand to block the photo. The Atlantic Station guard was also hesitant to notify Atlanta police, who have a mini-precinct in the retail center, Swicord said. “There was no compassion in this security officer for the victim. He was reluctant to take a report and document the incident,” Swicord said. Swicord also says that an off-duty uniformed Atlanta police officer was hesitant to take action or file a report. But Swicord says he and Philip Rafshoon, a longtime LGBT activist and business owner, insisted and called Atlanta police LGBT liaison Officer Brian Sharp, who spoke with the off-duty officer. “Only after that did the attitudes seem to change and Grady EMS was called and an on duty APD officer came on scene,” Swicord said. Officials with Fenuxe, which hosted the event, were notified of the attack, Swicord says. The media outlet posted about the Fire Party on Sunday but didn't publicly address the gay bashing. On Sunday night, Tyler Calkins, the magazine’s publisher, said he’s been in contact with Atlantic Station officials to review video surveillance of the area. Calkins said off-duty police officers were hired to provide security at the event. An Atlanta police spokesperson confirmed the basic details of the incident on Sunday, but could not provide a detailed account of what took place. A note to our readers: An earlier version of this story reported that Atlantic Station issued a statement about the incident on Sunday that did not respond to allegations that its security guard attempted to eject the victim and a friend from the Fire Party and then was hesitant to take action. A second statement, detailed above, was provided to Project Q Atlanta on Monday after we asked a second time about the allegations concerning the response from the security guard.