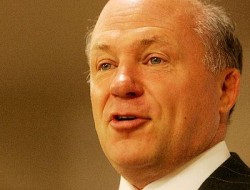 Despite claims that it has “no agenda against anyone,” the evidence showing that Atlanta-based Chick-fil-A funnels its profits to anti-gay groups continues to mount.

The privately-owned chicken chain giant found itself in a vat of controversy in January when gay bloggers latched onto ties between Chick-fil-A and groups that fight against marriage equality. President Dan Cathy (photo) stumbled with the company’s response when he insisted its WinShape Foundation in North Georgia welcomes everyone, despite clear evidence that it rejects same-sex couples.

Now, Equality Matters exposes Chick-fil-A’s ties to anti-gay causes in an investigation that shows that WinShape’s chartable efforts have delivered more than $1.1 million to anti-gay groups, including ones that “deliver anti-LGBT messages and promote egregious practices like reparative therapy that seek to ‘free’ people of being gay.”

Although Cathy has unequivocally denied being anti-LGBT and claimed that he and the company have “no agenda against anyone” and “will not champion any political agendas on marriage and family,” Equality Matters research proves just the opposite. In fact, the company has strong, deep ties to anti-gay organizations like Focus on the Family and the Fellowship of Christian Athletes, and its charitable division has provided more than $1.1 million to organizations that deliver anti-LGBT messages and promote egregious practices like reparative therapy that seek to “free” people of being gay. 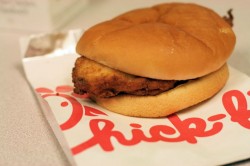 In 2008, WinShape received $12.6 million from Chick-fil-A; in turn, the foundation doled out $1.1 million to anti-gay groups over a five-year period ending in 2008, according to Equality Matters, which examined the foundation’s tax records. The donations to several groups include $2,000 to the Georgia Family Council, which says same-sex marriage threatens the institution, and $1,000 to the Family Research Council, which has been labeled a hate group by the Southern Poverty Law Center.

The Equality Matters report also says Chick-fil-A favors married employees, partners with anti-gay Focus on the Family and backs All Pro Dad, which has ties to anti-gay groups.

Not that the controversy has nicked the company. Its founder, Truett Cathy, is one of the world’s billionaires and the chain notched an 11 percent jump in sales last year, boosting that tally to $3.58 billion.