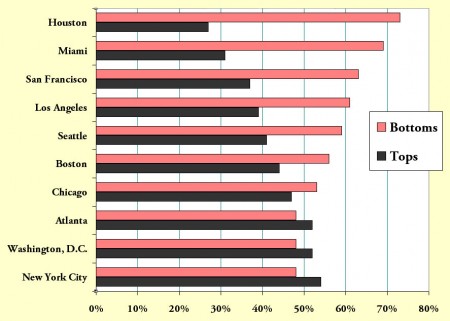 What we learned on the Internet today:

• Georgia ranks among most states in being top heavy — as in more tops than bottoms. Seriously. That’s according to an unscientific study from Manhunt, which trolled its user profiles to find that more of its members in Georgia describe themselves as tops. Keep in mind those categories are self-reported. Any experienced gay knows that what one says in their online profile can be dramatically different when the clothes come off in person.

If you’re looking for flipping fun, by the way, your best chance is in the Mountain West.

• Atlanta is one of just one of three cities — the other two being New York and Washington — with more tops than bottoms. Seriously. That’s according to a study of Craigslist personals by the Sword. Houston ranked the highest for Craigslist users seeking tops among the 10 big cities surveyed. (See chart)

• Atlantans have the highest sexual satisfaction (73 percent) among 10 cities surveyed by Trojan. We’re also doing it a lot more than other cities, ranking second for sexual frequency.

How many times do Atlantans do it each year? Some 88 times or 1.7 times per week, second only to Houston, where they go at it 101 times a year. Men, not surprisingly, are more likely (73 percent) than women (53 percent) to want more sex.

So, despite a shortage of guys willing to give up the booty, Atlanta’s tops are banging away more than their gay brothers in other cities and apparently enjoying every minute of it. Maybe that’s why Atlanta’s nightlife seems to be on a years-long depression — everyone’s already slipping on the Trojan and getting it on.