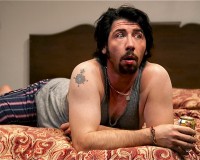 As the scheming, alcoholic, drug-addled best friend from hell in Pinch n’ Ouch Theatre’s current production of “Tape,” out actor Topher Payne strips down and takes a gritty break from nice guys and drag sendups.

We’ve come to expect a certain sensibility from Payne (top photo). As a writer, he’s known for his Domestically Disturbed column in the GA Voice and his queer-inclusive, crowd-pleasing stage comedies. As an actor, his stage roles include Dorothy in “Golden Girls Live,” Joan Crawford in “Christina Darling,” a “Vampire Lesbian of Sodom,” and an eerily accurate Julia Sugarbaker in the all-male production of “Designing Women Live.”

So audiences might be surprised seeing him drinking, smoking, snorting, and shoving his way through “Tape.” That’s right, kids: Under shaggy black hair and a scraggly beard, Topher Payne has gone bad. And he couldn’t be happier about it. 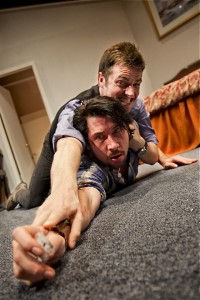 The production, playing at 7 Stages through June 5, follows aspiring filmmaker Jon (Grant McGowen, second photo with Payne), who goes to a Motel 6 to meet his best friend from high school, Vince (Payne). Both have come to town for the opening of Jon’s first film, but Vince has his own motives.

“The two of them had all these goals in high school, but 10 years later, Jon’s the one who actually got out of their hometown and pursued them,” Payne says. “And when someone, even someone you love, manages to achieve success that you don’t, it’s very tempting to convince yourself they didn’t deserve it. Vince has decided it’s time for Jon to face mistakes for which he never properly paid.”

“Tape” explores the nature of male friendships, and the trouble that rises when one friend grows up and moves on, but the other is stuck and can’t let go.

“Everyone has the friend in their life that, if you really asked yourself, you’d have a hard time explaining why they’re still there. All these guys have in common is history, but Vince never moved on from the past–that’s where he lives.

“Isn’t that the nightmare?” he continues. “That an experience you thought you learned from and forgot about, somewhere out there, there’s someone who still thinks about it every day? Vince thinks he’s on a moral crusade, but it’s really just obsessive jealousy.”

The play takes place in real time, covering 90 minutes in a filthy hotel room as the reunion deteriorates into a violent confrontation between the two men. That led to some interesting moments when Payne came home from rehearsals.

“I wouldn’t tell my husband many details about the plot, because I didn’t wanna spoil the surprises,” Payne says. “So he’d ask why I had rug burn on my knees, and I’d have to explain that I’d been fighting in my underwear all night, but I couldn’t tell him why.”

Two guys wrestling in a hotel room, one of them in his underwear, lots of drugs and beer… Sounds like a setup we’ve–maybe, allegedly–seen on XTube. But Payne says it’s not an explicitly gay show, though it is as compelling and suspenseful as they come.

Payne’s radical departure from his usual wheelhouse is getting rave reviews, too. The production has been recommended by the Suzi Bass Awards, Atlanta’s version of the Tonys. After the show closes, he slips into something a little more familiar: He puts on his Julia power suit for PALS “Designing Women” Bingo on June 8, and the Sugarbaker’s ladies return with two new episodes via Process Theatre on stage this fall.

“Right now, we’re figuring out the logistics of doing the Supremes episode,” Payne says. “It’s by far the most-requested one we haven’t done. But these things are a bitch to adapt from TV to stage.”

Also this fall, Process will produce Payne’s comedy “Lakebottom Proper,” about a conservative couple throwing a party for power lesbians. The play broke box office records when it premiered at the Springer Opera House in Columbus this year.

But for now, Payne plans to relish making life hell in a Motel 6. Check out the trailer for the thriller below.