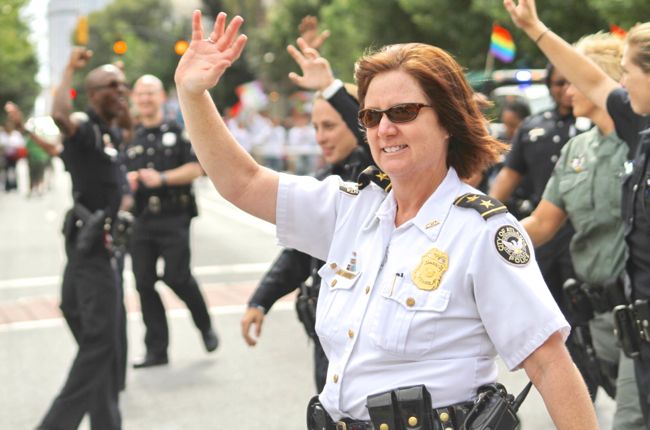 The top openly gay commander at the Atlanta Police Department retired on Monday, ending a 30-year career that spanned most corners of the agency and included efforts to repair the department's tattered image with LGBT residents after a botched bar raid.

Deputy Chief Renee Propes became one of the agency's top five commanders after a promotion in November 2010. That capped a three-decade career with Atlanta police that included work as a beat officer, investigator, commander of the Crimes Against Children Unit, hostage negotiator and top cop at Hartsfield-Jackson Atlanta International Airport.

When Propes was promoted to deputy chief in 2010, she took command of the newly-created Community Services Division, which includes the department's two LGBT liaisons. She also often served as the face of Atlanta police as it worked to rebuild its image in the wake of the Eagle raid in 2009. The botched raid of the gay bar led to several investigations, lawsuits and officers being fired. It also helped bring an end to the Red Dog Unit, which Propes helped found years earlier. Officers from the unit took part in the Eagle raid.

Propes enjoyed wide support from neighborhoods in the department's Zone 6, where she once served as commander. In January 2010, supporters protested when Propes was moved to head up police operations at the airport and pulled from the busy zone that includes portions of gay-heavy Grant Park, Little Five Points, Edgewood and Kirkwood.

As deputy chief, Propes responded quickly to problems, speaking out forcefully in 2012 when a gay slur was found scrawled on a photo of Erik Estrada left on a desk of a retired officer. “It's some kind of stupid joke,” she said as the department launched an internal investigation. She also attended a public rally in February 2012 for a gay man who was attacked in southwest Atlanta and was among police commanders who appeared at a public forum in the wake of the Eagle raid.

Propes has a plush side, too, helping the department's LGBT offices collect toys for needy children during the holidays. She also marched hand-in-hand with gay cops during several Atlanta Pride parades and noshed a little more formally with the gays during the HRC Atlanta dinner in 2012.

A retirement celebration is set for Propes on Feb. 6 at Manuel's Tavern. The event starts at 6 p.m.

Propes declined through an Atlanta police spokesperson to be interviewed.