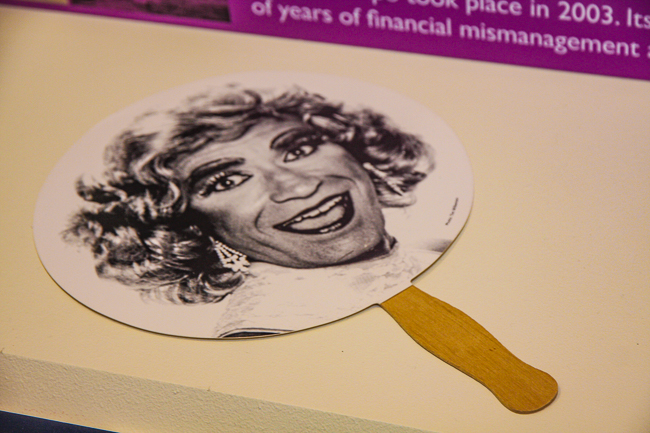 Bar raids by Atlanta police. The AIDS epidemic. Pride festivities through the years. The protests, the venues, the breakthroughs, the drag shows, the controversies, the celebrations — the queer Atlanta of it all. Every bit of it is part of the “Out in the Archives” exhibit at the Georgia State University Library in downtown Atlanta.

The exhibit, on display now through September 2020, is the result of a year-long effort by GSU’s Special Collections & Archives department that debuted just before Atlanta Pride in October. It’s a project whose time has come, according to Morna Gerrard, archivist for GSU’s Women’s Collection and Gender & Sexuality Collection.

“We decided that since we’ve never been able to highlight the Gender & Sexuality collections, plus it’s the 50thanniversary of Stonewall and the police raid at Ansley Mall, we figured this was a good year to do that,” she told Q during a recent tour of the exhibit.

“The three of us would meet once every week or two and gradually work our way through the collections and decide how we were going to structure the exhibit, because we want to reach as many people as possible and to document as many lives as possible,” Gerrard said.

View our gallery below the story for a snippet of what's in store, and keep reading for the lowdown on an exhibit you might not have known about but need to see this year.

The Good, the Bad and the Gaps 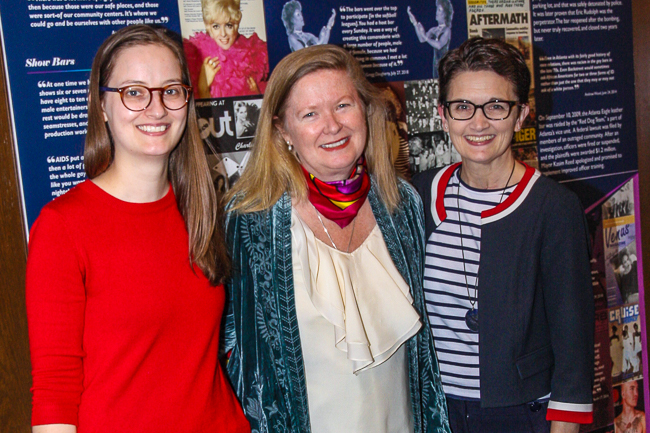 Bringing the fullness of queer Atlanta’s history to the exhibit involved a lot of digging.

“If we found gaps, we’d say, ‘OK, we think somewhere maybe in Cruise Magazine there’s an article about this,’ and [Morrish] would play detective and go hunt it down,” Gerrard said.

The detective work resulted in an exhibit broken up into panels covering various segments of queer life in Atlanta, beginning with the Georgia Gay Liberation Front in 1969.

“We don’t have collections that go much further back,” Gerrard said. “Very few people do by the nature of the fact that it was illegal to be gay.”

A “Finding Community” panel covers LGBTQ Atlanta’s places, activities, publications, bars and churches over the years. Gerrard and her team didn’t want to sugarcoat any of it.

Atlanta’s queer arts scene is also covered, including photos from theaters past and present, and an outfit from poet Franklin Abbott of the Radical Faeries.

The panel on the AIDS epidemic made for the toughest decisions.

“There’s just so much information that we just felt this cannot do it justice, so that was my challenge with it,” Gerrard said. “We’ve done as much as we could within this small area.”

“We did want to bring up that there are people thriving and surviving but there are also people still dying,” she added.

To tell more of the story, the archival department is working on a podcast on the history of HIV/AIDS in Atlanta that will come out in early 2020.

A “Protests” panel includes the Anita Bryant controversy in the 1970s, the Bowers vs. Hardwick case on Georgia’s sodomy laws in the 1980s, the Cracker Barrel employer controversy and the Olympics Out of Cobb effort in the 1990s.

As inclusive as it is, Gerrard is quick to point out that the exhibit is not comprehensive. There are gaps in the collection that need to be filled covering transgender people, bisexuals and people of color.

“For groups that have been marginalized so much, we wanted to be as inclusive as possible using the collections that we had,” Gerrard said. “There are gaps, so our ask is that if you see a gap, help us fill it. Find us a donor, or if you’re a donor yourself, give us your collection.”

Gay Atlanta resident Brian Basinger, a 2008 graduate of GSU’s law school, was “blown away” by the exhibit.

“Who knows what a law student or a journalism student or a business student at Georgia State will discover going through these records and files that could form the basis for a legal argument, a book or a successful new start-up company?” Basinger said.

In fact, more students have come to see the Out in the Archives exhibit than any of the department’s previous exhibits, according to Gerard.

“I really feel like Special Collections now is a space on campus that it feels very safe and welcoming to students,” she said. “That’s been an added bonus on top of that we are documenting a community that I really care about and has a really, really rich history, and it’s often completely neglected.”

Basinger agrees that the exhibit offers a unique chance for LGBTQ Atlanta to learn all about its history.

“Including its triumphs, its defeats and the memories of those brave pioneers we lost along the way who demanded respect and dignity for everyone,” he said.

The items in the exhibit represent a fraction of the Gender & Sexuality Collection at GSU, so Gerrard and her team created an online version of it as well. Next, they want to turn the online version into a permanent Atlanta LGBTQ history timeline.

Pick up a new Q magazine every Thursday at queer and LGBTQ-friendly venues around town and find fresh content every day at theQatl.com.