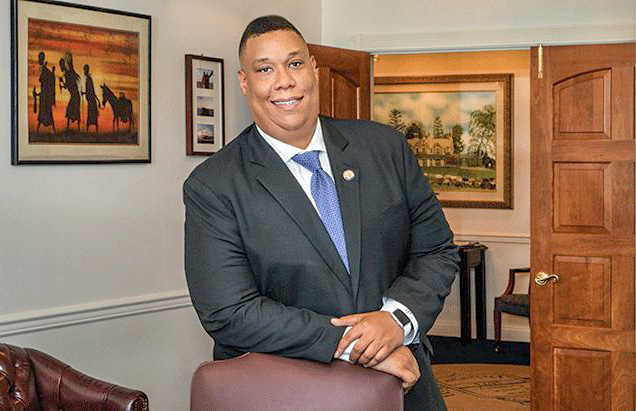 LGBTQ leaders of Mayor Keisha Lance Bottoms' new One Atlanta initiative are focused on ambitious goals – including tackling LGBTQ youth homelessness – as they add staff and resources to the city's first-ever equity, diversity and inclusion office.

Bottoms announced the creation of One Atlanta during her State of the City address on May 2. In a May 23 press release, the office set out five goals: a safe and welcoming city; world-class employees, infrastructure and services; an ethical, transparent and fiscally responsible government; thriving neighborhoods, communities and businesses; and residents who are equipped for success.

“It’s still a topic in its infancy, and two years ago was really a new idea and concept when it comes to government and government resources and spending and allocation,” said Rashad Taylor (top photo), the city's new Chief Equity Officer and head of One Atlanta.

Taylor said Bottoms wanted to expand the equity program – which had been in place under former Mayor Kasim Reed for two years with a single staff member – when she took office in January. She looked to Taylor, who had returned to public sector work in Delaware after heading up Bottoms' runoff campaign last year.

“She asked me over the course of several weeks before the inauguration to come back and help really just do some good in Atlanta, and I couldn’t turn that down, so here I am,” Taylor said.

Taylor is a political strategist and former state lawmaker who was outed by an ex-boyfriend in 2011. He lost a reelection bid the following year after Republicans redrew district lines in their favor and has since worked behind the scenes as a political consultant.

Upon his return to Atlanta, Taylor staffed up. He brought on as his deputy Reese McCranie (second photo), the gay former aide for Mayor Kasim Reed who up until April served as director of policy and communications for the Atlanta airport. Other LGBTQ people on the nine-member One Atlanta team include the mayor’s recently-named LGBTQ liaison Malik Brown as well as Javier Brown, former aide to state Sen. Vincent Fort.

Taylor said the staff has been getting familiar with work being done in the nonprofit, corporate and philanthropic communities, as well as looking at what other cities (he mentioned New Orleans, Austin, Seattle) at the forefront of equity have done.

“We’re in the early stages, but I think we’ve had some amazing wins, or some good successes, up until this point,” Taylor said.

“Our real goal is to figure out how we can embed equity in everything the city government does,” Taylor said. “How we can operationalize equity so that when the finance department is figuring out the budget, or when public works is figuring out trash collection and how we’re going to distribute recycling cans, or whatever the issue may be, that they always look at it through a lens of equity, understanding that some folks in our city need more assistance than others.

“To make sure everyone is lifted by the great opportunities that we have in Atlanta, we’ve got to be more cognizant of their needs and meeting those needs,” he added. “Really for me, after four years if we can figure out how to operationalize equity, I think we will have been successful because our work will last far beyond this administration.”

McCranie said the team is committed to Bottoms' vision for Atlanta.

“We’re all working toward building a more equitable, affordable and resilient city as Mayor Bottoms has outlined,” McCranie said. “And she believes very strongly, as do we, that your zip code shouldn’t dictate your life outcome. That’s why everything that we’re doing … really will get the department to start thinking about how they can be more equitable for folks who live in the city or people who want to buy in the city or rent in the city, and really give folks an opportunity to succeed.”

“What that essentially will do is to really allow city employees at the highest level — commissioner, deputy commissioner-level of each department — really to understand what equity is and how the decisions they make on a daily basis really affect life outcomes for people in Atlanta,” he said.