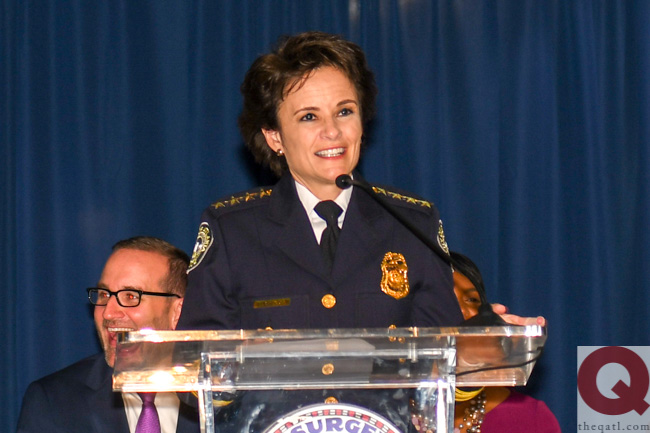 Shields' career with Atlanta police spans more than 20 years and she has faced – more than once – the task of cleaning up after missteps by officers involving the city’s LGBTQ residents.

In a brief statement issued Saturday, Shields said she was resigning to help the city mend its fraught relationship with Atlanta police.

“For more than two decades, I have served alongside some of the finest women and men in the Atlanta Police Department,” Shields said. “Out of a deep and abiding love for this City and this department, I offered to step aside as police chief. APD has my full support, and Mayor Bottoms has my support on the future direction of this department. I have faith in the Mayor, and it is time for the city to move forward and build trust between law enforcement and the communities they serve.”

Mayor Keisha Lance Bottoms announced Shields's resignation less than 24 hours after a white police officer shot and killed Rayshard Brooks, a 27-year-old black man and father of several young children. The shooting, which unfolded in a Wendy’s parking lot on University Avenue on Friday, touched off demonstrations that evolved into property destruction on Saturday. The incident came after two weeks of “no justice, no peace” rallies and marches across metro Atlanta in the wake of the death of George Floyd at the hands of Minneapolis police on May 25.

“Chief Erika Shields has been a solid member of APD for over two decades and has a deep and abiding love for the people of Atlanta. And because of her desire for Atlanta to be an example of what meaningful reform should look like across this country, Chief Shields has offered to immediately step aside as police chief so that the city may move forward with urgency in rebuilding the trust so desperately needed throughout our communities,” Bottoms said Saturday during a press conference (second photo).

“What has become abundantly clear over the last couple of weeks in Atlanta is that while we have a police force full of men and women who work alongside our communities with honor, respect and dignity, there has been a disconnect with what our expectations are and should be as it relates to interactions with our officers and the communities in which they are entrusted to protect,” Bottoms added. 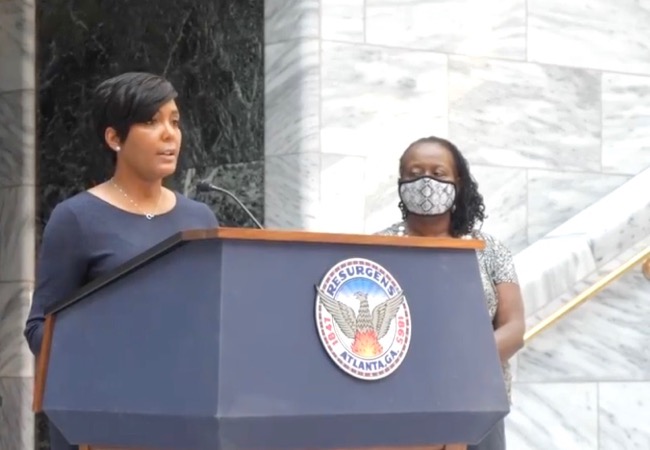 Shields was the agency’s second female chief and it’s first LGBTQ one. She was named the city’s top cop in December 2016 by then-Mayor Kasim Reed. During the announcement, she said she was proud of the progress Atlanta police have made in repairing relationships with LGBTQ residents since police raided the Eagle in 2009.

Shields had a front-row seat to the aftermath of the Eagle raid when she served as chief of staff for then-Chief George Turner. In 2011, Turner tasked Shields with cleaning up the mess the raid left behind. That included compliance with the terms of a federal lawsuit filed over the raid, which the city and the police department sometimes struggled to meet.

Shields quietly came out as LGBTQ in a 2017 profile in Atlanta magazine. Just prior, she had marched alongside LGBTQ officers in the Atlanta Pride parade. Later that year, Shields and the department were plunged into controversy when police commanders closed two gay bars early during Black Gay Pride. Bar owners accused police of targeting black gay party-goers. Shields said she was “disappointed” by the “honest mistake” officers made.

In 2018, she joined Bottoms during the mayor’s inaugural Pride reception. During that event, Shields (top photo) hinted at the issue that would two years later lead to her resignation.

“The Atlanta Police Department has not always fared well within the gay community. And I would say that unfortunately, it was indicative of a much larger issue that existed,” Shields said. “I would venture to say that the black community was on the receiving end of very similar treatment for many years long before anyone.” 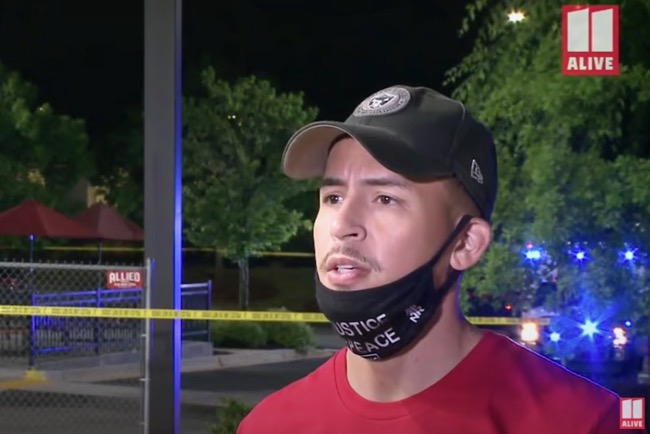 Councilmember Antonio Brown (third photo), the only LGBTQ member of the Atlanta City Council, said “immediate action” was needed to address police use of force. Brown called for Shields’ resignation and said Bottoms and the entire council were also to blame for the police shootings of unarmed black men.

On Tuesday, Bottoms announced the creation of a Use of Force Advisory Council to study the city’s use of force policies and procedures.

Today I was asked by the @nytimes whether Chief Shields should resign? Here’s my thoughts: all @atlcouncil & @KeishaBottoms should resign too. We’re all equally responsible for the unarmed black lives lost to police brutality. We could’ve been passed legislation to address this!

We must dismantle this political system that values politics over people and common sense legislation. What will it take for our government to value black lives? And, not only when you’ve compiled a fancy black agenda because you need their vote! ⁣

Say his name. #RayshardBrooks
I was on scene at 1:45am, it was chaos and residents were in outrage. At this juncture, we need immediate action to address excessive force by local police in Atlanta. We cannot wait another day for another unarmed black man to be shot & killed. pic.twitter.com/eR6kS7xAf2