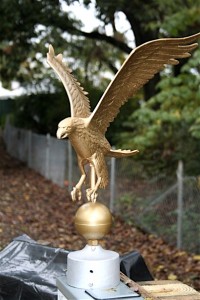 The Georgia chapter of American Veterans for Equal Rights makes its sixth annual Memorial Day Taps Ceremony special this year with the rededication of a refurbished veteran’s monument in Piedmont Park on Monday.

With the end of “Don’t Ask, Don’t Tell” just a matter of time, the local men and women of AVER bought new hoisting hardware and a gold eagle (photo) for the top of the veteran’s flagpole. It will be mounted before and rededicated during this year’s ceremony.

“American Veterans for Equal Rights is the nation’s only LGBT VSO recognized by the Veterans Administration,” says AVER’s national President Danny Ingram in a press release.

Ingram, an Atlantan, was the Georgia chapter president until he accepted the national post last year.

“With the end of the “Don’t Ask, Don’t Tell” policy within sight,” Ingram says, “AVER hopes to transition to a true VSO in order to ensure that LGBT service members are not only treated fairly but that our veterans receive the full benefits to which they are entitled as compensation for their honorable service to our country and our principles of equal justice for all Americans.”

AVER Georgia’s Memorial Day Taps Ceremony takes place at noon Monday in front of the old American Legion Hall at Piedmont Park’s 12th Street gate on Piedmont Avenue. The City of Atlanta Fire Station’s Ladder 15, located at 170 10th St., volunteered to use their ladder truck to mount the new implements and has purchased a new flag.

Members of Ladder 15 have been invited to participate in the rededication ceremony and will be honored for their “crucial assistance” in the renovations, says Alex Lopez, AVER Georgia president.

“As you can imagine, a majority of our veterans usually end up working as first responders, and we hope to be able to add the Atlanta Fire Department flag to our flagpole for a show of partnership and collaboration,” he says. “We are very proud of this accomplishment.”

The raising of the new flag and rededication ceremony will be followed by the playing of Taps in honor of fallen veterans.