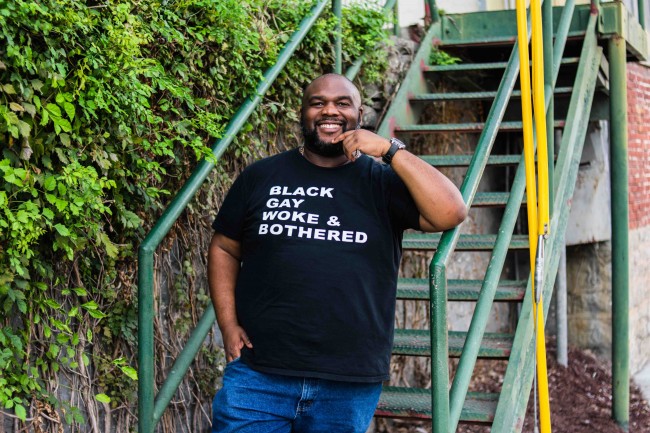 Johnnie Ray Kornegay III is many things, but stagnant is not one of them. Photographer, creator, consultant, activist — his imprint shows across Atlanta.

He advocates around issues impacting black gay men for the Counter Narrative Project, he’s heavily involved in HIV and civil rights advocacy and he’s the founder and artistic director for an arts company called Staticc, with a mission of “delivering beauty to the world” through his own work as well as singer-songwriter Kipper Jones.

Kornegay talks more with Q about his heroes, his motivation, his art and his fears.

Tell us about your background.

I was born and raised in Chester, Pa. I was raised by my two heroes, my parents, Brenda and Johnnie Kornegay. They were supported by a whole host of family. I have one brother, Ed Kornegay.

My upbringing was a very 1980s black experience. Atari, Nintendo, rap music and bike riding. While there were parameters I had to stay within as a kid, I always had a feeling of freedom at the same time. I was fortunate to have a large supportive family around. I was always a little different as a kid, but I never felt ashamed because of it. There was a lot of love around me.

What drew you to civil rights advocacy?

It started young. My parents would take my brother and I with them to vote. It planted the seed that we had a civic duty, and we were taught that my ancestors were killed so we could have the right to do it.

This civic action was stoked again around the time I was 8 or 9. I remember I was in third grade, and my teacher Ms. Shelly had given us an assignment to read a newspaper article. The article I picked happened to be about the HIV epidemic. This was around 1985. I remember being so moved by it. After high school, around 1996, I began volunteering with the Chester AIDS Coalition. It was humbling. I learned a lot.

How important a role do the arts play in advancing civil rights?

For context, the music, writing and poetry of black artists in the 1950s and 1960s wasn’t separate from the civil rights activism happening at the time. It was part of it. It was all one thing with multiple creators.

I learned about HIV because of 1980s and 1990s pop culture. I remember watching Neneh Cherry’s “I’ve Got You Under My Skin” video. It was the visual arts from Keith Haring, the music from Janet Jackson, the poetry from Essex Hemphill that gave me courage and knowledge. Art of my childhood was seductive in the way it taught me to think more deeply. I could speak out.

Art is indispensable from social change for black folks. It gives us context. It gives us language. It helps us understand the world around us.

What moment are you most proud of so far?

The moment I am selecting is actually one of my most recent accomplishments. I am most proud that I was selected to shoot the cover of Positively Aware Magazine’s September/October 2018 issue on HIV decriminalization. As a person who’s released two bodies of artistic work publicly that included the stories of black gay men living with HIV, I was so honored to do the cover. HIV laws around the country must be modernized. I am committed to being part of that change.

What's something people would be surprised to find out about you?

One of them I did this morning. I shocked both of my best friends by rapping the entirety of “Relentless” by Erick Sermon. I think people would also be surprised that I, too, worry that I won’t find a life partner. Take note y’all, I’m available for dates and chats about changing the world.

This column originally ran in Q magazine. Read the full issue below:

Pick up your copy at LGBTQ and queer-friendly venues around town, and look for a new edition each week.