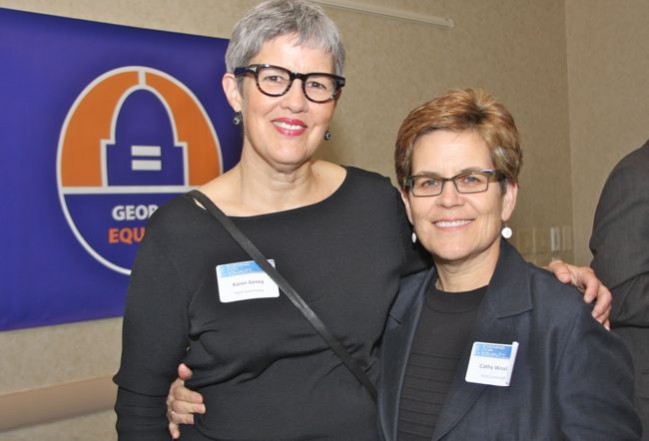 Cathy Woolard, a lesbian and longtime political trailblazer in Georgia, is being mentioned as a possible replacement when Joe Solmonese departs the Human Rights Campaign later this year.

Woolard (top photo right) was the first openly gay person to be elected to office in Georgia and the first openly gay president of the Atlanta City Council. She’s recently been a consultant for HRC and her name surfaced on Friday when news broke that Solmonese (bottom photo), who has led HRC since 2005, will step down. 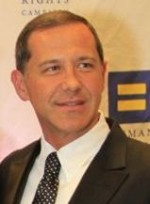 Late Friday, prominent lesbian blogger Pam Spaulding reported that Solmonese would leave in December and that HRC would make an official announcement early next week. The move is part of a larger shakeup at the nation’s largest LGBT rights group, Spaulding reported.

Spaulding also reported that HRC already has focused on a replacement for Solmonese.

His departure also signals, according to our source, the beginning of a larger staff shake-up in the HRC. The Blend can also report that a replacement executive director has been identified — it will be someone who is not currently on the HRC’s staff, but is currently a paid consultant that has worked with the civil rights group for some time.

Spaulding refers to the person she reported was identified as Solmonese’s replacement as “a paid consultant” who has worked with the organization. Metro Weekly has identified that consultant as Cathy Woolard, who most recently served on the senior leadership team at CARE, which describes itself as “a leading humanitarian organization fighting global poverty” and is based in Atlanta.

Although the sources say that no permanent replacement has been selected, none of the four sources were willing to say what, if any, role Woolard would play in the transition efforts at HRC.

Project Q Atlanta could not immediately reach Woolard on Saturday morning. HRC has not made any public comments on the situation since Spaulding’s report.

HRC, Geidner reports, is expected to discuss the staffing moves during a conference call on Saturday. Two Atlanta residents serve on HRC”s board — LeeAnn Jones and Molly Simmons.

Woolard, who most recently served as a Gold Dome lobbyist for Georgia Equality, has a long history with HRC. She worked at the organization for seven years before returning to Atlanta and eventually running for the Atlanta City Council. She upset an incumbent and won Midtown’s District 6 post in 1997, creating what has since become the council’s traditional LGBT seat and becoming the first openly gay elected official in the state.

Woolard went on to become the first woman and openly gay City Council President in 2002 before resigning in 2004 to launch a failed bid for Congress. Woolard has also served as executive vice president for Global Advocacy & External Relations at CARE.

In 2010, Woolard served as chair of incoming Mayor Kasim Reed’s search for a public works commissioner. Also in 2010, Woolard was named one of 120 grand marshals of the Atlanta Pride parade.

UPDATE: An HRC spokesperson tells MetroWeekly that “there is no nexus between [Woolard] and this search process.”