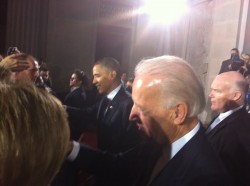 A raucous crowd that watched President Obama sign a repeal of the military’s “Don’t Ask, Don’t Tell” policy Wednesday morning included at least two LGBT activists from Atlanta. The crush of people wanting to be on hand for the repeal signing was so large that White House officials moved it to an auditorium at the Interior Department in Washington, D.C. On hand from Atlanta was gay attorney and veteran Jeff Cleghorn and Molly Elizabeth Simmons, co-chair of the Human Rights Campaign’s board of governors. Cleghorn snapped photos during the ceremony (top photo) and offered this update on Facebook:

Thrilled to have witnessed history as President Obama signed the bill repealing DADT into law. I shook the President's hand and thanked him for making history. YES WE DID!!!

Cleghorn has been a vocal advocate for repeal of “Don’t Ask” and his efforts included debating a retired Marine general on Fox 5 and organizing an Atlanta event in November that raised more than $30,000 for the Servicemembers Legal Defense Network. Cleghorn serves on SLDN’s board. Cleghorn says he’ll return from D.C. in time to attend a DADT repeal celebration in Atlanta on Wednesday. The event is set for 5:30 p.m. at Manuel’s in Poncey-Highland. (Local lesbian radio host Betty Couvertier interviewed Cleghorn on "Alternative Perspectives" Tuesday. Listen below.) 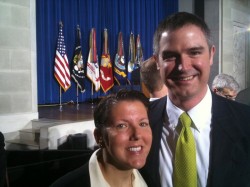 Simmons, who is also a member of the Atlanta Police Department’s LGBT advisory board, joined her HRC co-chair Tom Kovach at the signing ceremony on Wednesday (second photo). Obama was strident in his remarks before signing the repeal, which begins the process of ending the ban on openly gay servicemembers. An 87-page implementation plan will help guide the military in ending the repeal before the Pentagon and Obama certify the measure can finally be struck down. "No longer will our country be denied the service of thousands of patriotic Americans who are forced to leave the military -- regardless of their skills, no matter their bravery or their zeal, no matter their years of exemplary performance -- because they happen to be gay,” Obama said. “No longer will tens of thousands of Americans in uniform be asked to live a lie, or look over their shoulder in order to serve the country that they love.”