Marlo Hampton, the most arrested cast member on “The Real Housewives of Atlanta,” knows a thing or two about a scuffle. But she’s backing away from a fight with the gays by walking back the anti-gay slur she threw on Sunday’s episode.

Oh yes, she went there on Bravo’s most popular series in the franchise and one in which most every “Housewives” cast member has a gay sidekick. Here’s how it went down: In a confrontation with Sheree Whitfield during their 10-day trip to South Africa, Hampton went after Whitfield over a spurned dinner invite. Tensions heightened and, of course, the slur hit the fan (video above).

“That’s why you don’t have a man. Go hang with the faggots, you ugly stupid ass,” Hampton says to Whitfield.

In a cutaway, Kandi Burruss offered this analysis: “I don’t know etiquette but I know you’re not supposed to say that.” 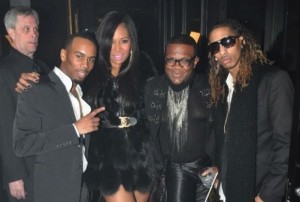 Hampton, sensing her slur could enrage the gays enough to cost her a permanent slot on the show, worked on Monday to walk back the anti-gay slur.

“I would like to offer from the bottom of my heart the fullest and most heartfelt apology for my recent use of an anti-gay slur,” Hampton says in a blog post. “When I used this word, I was not mindful of the demeaning connotation that this has in the gay community. My speech was irresponsible, thoughtless and said with the intention of conveying anger rather than as a statement on my feelings towards the gay community as a whole.”

The show’s gay sidekicks – Lawrence Washington and Derek J – came to Hampton’s defense on Sunday after the show aired.

Marlo and I have spoke about the comment she made 2 Sheree. There was no [email protected] me personally. We r great friends and truly value each other

Derek J, who accompanied Hampton to a kickoff event for the MLK holigay earlier this month (photo), says her comment came out of anger, not any anti-gay feelings.

Hampton says she’ll work hard “to regain your trust, respect and your love.”

“I applaud and admire this community for their triumph over a sometimes harsh, mean spirited society that discriminates and even violently attacks those who are different. These are obstacles that I relate to and that I have been inspired by them to overcome. I celebrate this community and am saddened by any indication otherwise, that my actions may have caused,” Hampton says.