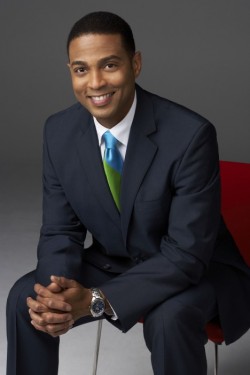 You sorta knew this was coming: Don Lemon, the smooth-talking and ever-capable Atlanta-based anchor for CNN, is coming out. For gays around town, it really isn’t a surprise.

But plaster it across the national news landscape with a profile in the New York Times and well, it becomes big news. Bigger yet when it’s part of a publicity push for his new book, “Transparent,” which discusses the life and career of the 45-year-old veteran news guy.

Anyway, back to Lemon and his tough choice to publicly acknowledge what friends and co-workers already knew: He’s a big mo.

“It’s quite different for an African-American male,” he said. “It’s about the worst thing you can be in black culture. You’re taught you have to be a man; you have to be masculine. In the black community they think you can pray the gay away.” He said he believed the negative reaction to male homosexuality had to do with the history of discrimination that still affects many black Americans, as well as the attitudes of some black women.

“You’re afraid that black women will say the same things they do about how black men should be dating black women.” He added, “I guess this makes me a double minority now.”

The public coming out was Lemon’s next logical step. In September, while interviewing three members of Megadaddy Bishop Eddie Long’s congregation about the gay sexcapades lawsuits facing him, Lemon talked openly about being molested as a child.

But why come out now?

It really came down to the act of writing the book. Mr. Lemon said he had been on a panel a couple of years ago called “The Black Man in the Age of Obama,” and was approached afterward by a publisher’s representative about writing an inspirational book.

“It was supposed to be a little pamphlet,” he said. “You know: say your prayers; have a good, hearty handshake; say good morning to your boss.”
But as he began to write, he came to realize that he could not hold back the truth of who he was. He started to pour out the details of his personal life. How he had grown up not knowing his father, how he had suffered abuse by someone close to him.