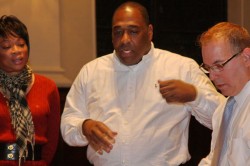 The exchange between Rick Westbrook (second photo), who advocates for gay and HIV issues through the Atlanta Sisters and East Point Possums, and Terence McPhaul (top photo center), YouthPride’s executive director, came during a nearly two-hour public forum with Mayor Kasim Reed and the LGBT advisory board for Atlanta police. McPhaul sits on the advisory board.

Westbrook spoke to follow up on an audience question about homeless gay youth and urged the crowd and Reed to attend Turned Away: The Truth About Atlanta’s Homeless Queer Youth on Wednesday. That forum is being hosted by the Atlanta Sisters and Queer Justice League. 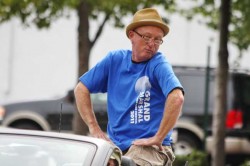 The exchange followed a discussion about the issue between Reed, activist Lorraine Fontana, and transgender activist and advisory board member Tracee McDaniel. Fontana also mentioned Wednesday’s meeting and asked Reed if the city would consider working with banks to use foreclosed and vacant homes in Atlanta to create homeless shelters.

Reed pointed to ongoing discussions between the city and local banks about foreclosed homes being sold to the city to help address homelessness, as well as a recent multi-million dollar grant from Bloomberg Philanthropies to reduce Atlanta’s homeless and panhandling problems. The mayor also said the city is hiring a Homelessness Czar and that he wants to work with YouthPride to address homeless gay youth. 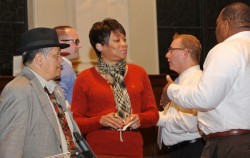 “It’d be great to partner with YouthPride … so [the czar] can get the kind of education and advice that your organization and others with experience in this space can provide,” said Reed, who added that he would dispatch a staff member to attend Wednesday’s meeting.

McDaniel (bottom photo center) then urged the mayor to assure that transgender and gender non-conforming people — both with HIV and without — are included in any homeless initiative.

“Right now is the time to have that conversation,” Reed responded. “We are moving forward with supportive housing in the City of Atlanta. I am open. I just need advice on the path forward.”

McPhaul, prior to the exchange with Westbrook, said that YouthPride is developing a homeless shelter and transitional housing for LGBT youth.

“We don’t want them to be re-victimized. We want to make sure we are placing then in environments where they are safe. There are some resources that people may not be familiar with, but there aren’t surely enough resources as it relates to LGBT youth,” he said.